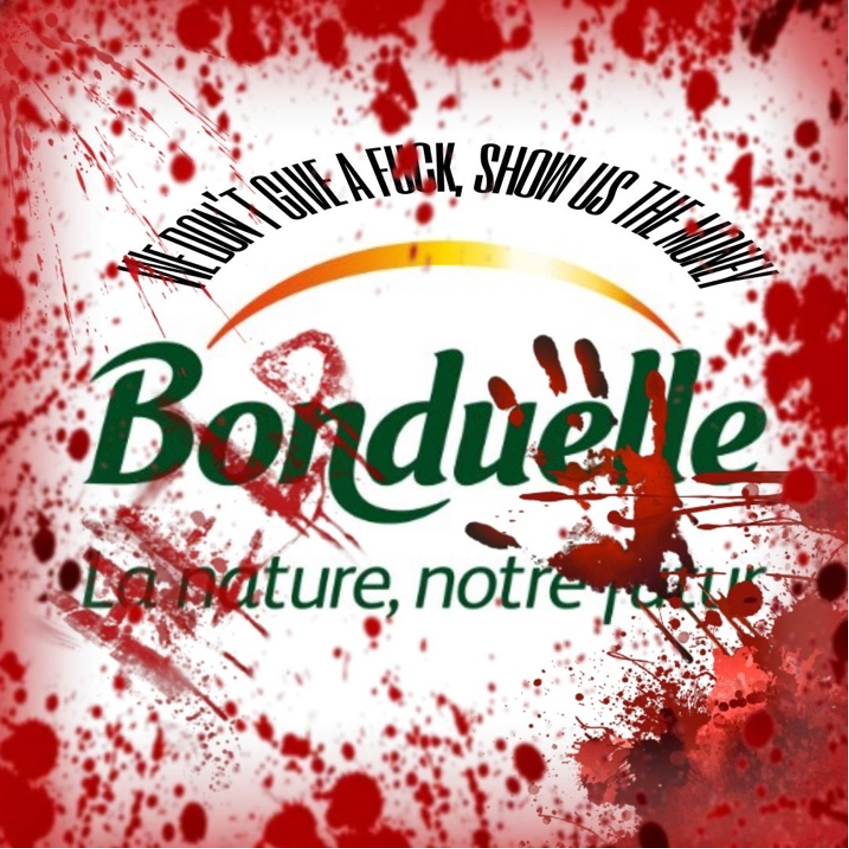 About five hundred Western companies that did not pick up the courage to stop operating in terrorist Russia, in the near future may reconsider their business strategies. The high-profile New Year’s scandal with “Bonduelle” showed that none of the scabbards of sanctioned restrictions can feel safe. Moreover, the vegetable connoisseur of the Russian army drew attention to all those who tried to “quietly” continue to make money on the blood of Ukrainians. What awaits those who put earnings above human life – figured out the Ukrainian Institute for the Future.

The story of Bonduelle, dating back more than 165 years, may end right now. Apparently, this time, the Soviet past played a cruel joke with the Western vegetable giant. Official congratulations, loud feasts and, of course, salad “Olivier” – how could it be without it? Perhaps, this logic was guided by the head of the Russian branch of Bonduelle, Ekaterina Eliseeva, when she decided to kill two birds with one stone: raise the image of her company and advertise her own products.

On New Year’s Eve, the group Yartsevo.LIVE on the social network vk.com reported that Bonduelle had congratulated SVO members on the New Year by handing over 10,000 congratulatory grocery baskets to which a postcard was added: “Come back with victory.” As noted, the company itself emphasized that supporting defenders is an integral part of the social responsibility of business.

The discussion of information quickly moved to Twitter, where in a matter of hours the publication of Ritor Fella gathered hundreds of thousands of views, thousands of shares, hundreds of comments, hitting the TOP Tweet of Kyiv and Ukraine, competing with Reznikov and Danilov.

And at the time of writing this publication, the views reached 2.4 million, competing with the tweets of Mr. Zelensky, hitting the TOP Tweet of France.

All this, a few hours before the New Year, forced the management of Bonduelle to come out with a public official refutation of information, which not only could not calm outraged buyers, but vice versa, caused a new wave of indignation, and a fall in the company’s shares.

In particular, Bonduelle stated: “The only goal of operating our company in Russia is to provide quality products to the population of the country and the nearest countries.”

After such statements, NEXTA Live made an unequivocal conclusion that found support from readers: “The French office is no longer able to control the Russian cell,” and users conducted their investigation into the life of Bonduelle-Russia head  Ekaterina Eliseeva.  And the news spread around the central Ukrainian media: NV Business, Obozrevatel, sprotyv.info and others captured the attention of public organizations, such as the Patriots of Ukraine, as well as such well-known publications as the  Baltic Delfi, the French  Le Parisien, Sud Ouest, Le Bonhomme. All this provoked a wave of investigations by both users and media giants.

Thus, journalists conducted a study of the photograph itself for its processing by special programs, and it was found that the picture was not edited or published until December 2022, which almost 100% indicates its authenticity.

And from publications from open sources, in particular the Forbs publication, users found that Ms. Kateryna dreamed of becoming a translator, and therefore received a specialization at the KGB Academy, and their public page is still  in the circle of their interests.

Moreover, the users also found that Ms. Kateryna was part of the Roscongress board, which directly falls under the sphere of interests of Vladimir Putin.

In addition, users reminded the company of its statements provided in the spring of 2022, a few weeks after the Russian Federation unleashed a bloody war, regarding the choice to continue working in the aggressor country and direct all profits “to the future restoration of Ukraine, not only its infrastructure, but also economic and foodecosystems”, noting that according to the published financial reports, not a single dollar was spent by the company to restore Ukraine’s infrastructure.

Needless to say, even now, a new tweet is generated every minute in the world, and such world-famous publications as: Der Spiegel,  Berliner Zeitung,  Le Figaro,  France 24,  AFP, Huffington Post, NAFA, and even an African news aggregator have joined the scandalous story, marking the geography of distribution to three continents.

Journalists did not ignore the activities of the company itself. Thus, the French channel TB5Mond found that Bonduelle-Russia took part in the social action “Basket of Kindness”, the purpose of which is to help vulnerable segments of the population – lonely pensioners, families with children, which is not refuted by the company itself. But, on 30.12.2022, deputy Dmitry Zharikov published information about the accession of the city Podilsk to  this action, the purpose of which was to collect New Year’s gifts for the military and their families, and in this way the scandalous basket, according to journalists, could be in the hands of a military man taking part in the war.

03.12.2023 Bonduelle published another denial regarding the sending of food baskets to the military taking part in the war. However, it again ignored the actions of the Russian branch and the fact that it is headed by a representative of the KGB Academy. At the same time, Yeleseyeva herself deleted her profiles in social networks, which eloquently testifies to her unwillingness to provide any comments.

Such actions again caused a violent outrage of users, who noted that the justification did not look convincing, and the company did not provide any information and assessment of whether the greeting was a personal decision of Kateryna Yeleseyeva and why she shared “fake news”.

In addition, users began to ask whether the company uses the crops stolen by Russia to sell under its own brand, recalling that paying taxes to the budget of the aggressor country is financing the bombs that kill civilians in Ukraine.

At the same time, the Embassy of Ukraine in France expressed its firm position: “While everyone is trying to find out whether Bonduelle really sent the baskets, the facts are there: Bonduelle remains in Russia and therefore, in principle, continues to make profits in a terrorist country that kills Ukrainians. Everything is said”.

In fact, the above-mentioned situation clearly shows us the whole duality of the  positions of European companies that have decided to stay working in Russia, even despite the warning “suspension of all investment projects”. After all, it is impossible to remain an unspotted democrat if you are constantly faced with certain terrible manifestations of a dictatorial regime. Therefore, virtually every brand compromises with the punitive regime and structures (KGB) or becomes directly involved in  the process of supplying the army, facing  the dilemma: “How to feed the Russians without helping the  genocide of the Ukrainian people?”

Now it is possible to state unequivocally that after such “New Year’s adventures” Bonduelle will not be able to do business in Russia as before. From the resignation of Ekaterina Eliseeva, the closure of the office in Russia to financial sanctions directly for the entire vegetable giant and the boycott of products at the world level, there are many options for the development of the event. But all these options have one thing in common – they will have an extremely negative impact on both Bonduelle’s reputation, and financial performance.

At the same time, for Ukraine and Ukrainians, this is, without exaggeration, a serious victory. We enter the new year with understanding: Bonduelle has become an example of how no company in the world will feel safe as long as it works with Russia. And such cooperation is not a matter of economic expediency at all. It is quite capable of questioning the very existence of a business. Expectedly,  In the near future, there will be new revelations with big names of the world market. Therefore, the sanctions policy is gradually moving into the sphere of public position and public administration. We saw that in the west there is a social demand to monitor compliance by Western companies with sanctions restrictions.

Bonduelle has to go. Who’s next?