» Аналітичні матеріали, Новини » “Nomen illis legio”: how one of the most prominent financiers of terrorist Russia fools the authors of sanctions packages 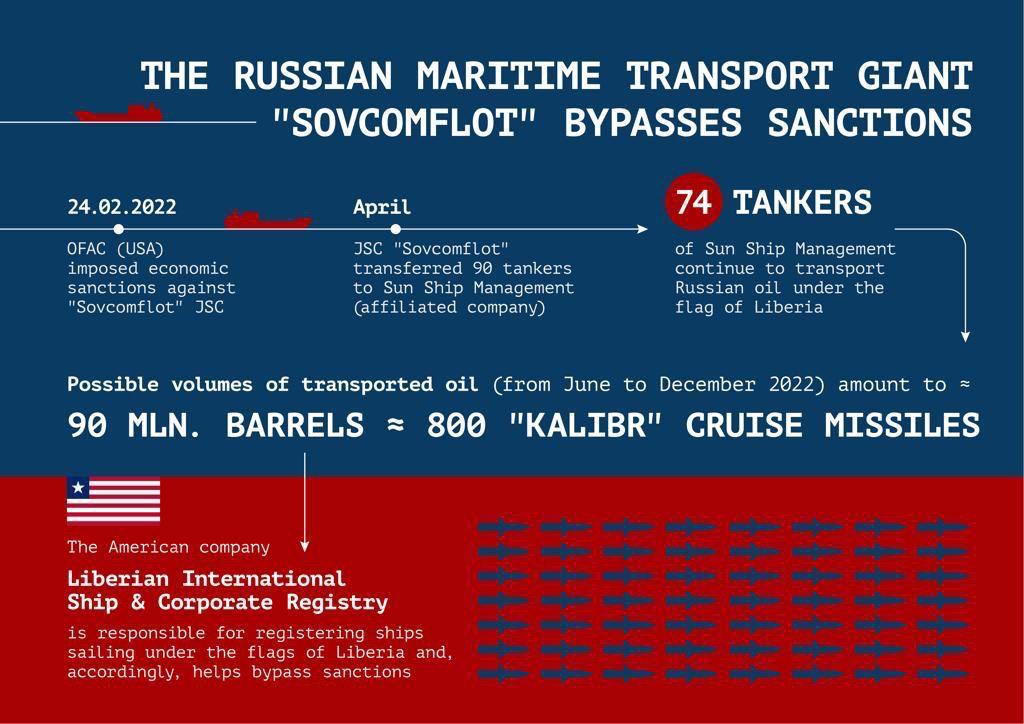 Evidently, Russian business has adopted the well-known slogan: “Nomen illis legio.” The game of changing names, the greed of some Western partners, and their lack of understanding of the methods of making money allow the sanctioned Russian maritime giant “Sovcomflot” to bypass the sanctions restrictions for the tenth month in a row. The Ukrainian Institute of the Future Specialists analyzed the peculiarities of the “obvious and the unbelievable”.

The ninth package of sanctions restrictions was supposed to end the financing of terrorist activities in Russia. Although, the first was not enough for “Sovcomflot” JSC because economic sanctions (OFAC, USA; OFSI, Great Britain) were imposed against this operator immediately after the Russian attack on Ukraine. The purpose of the sanctions was quite simple: to reduce the income of the Russian Federation from oil exports. But… Only during the period from June to December 2022 did tankers of the specified company (including at anchorages) load 253 times the oil in Russian ports. The possible volume of transported oil is ≈ 90 million barrels worth (!) 6 billion US dollars ($60 per 1 barrel). Do not try to imagine these funds. It is much easier to understand that only one sea carrier earned money for 2300 BMP-3 for the terrorist regime. Or maybe you like the calculation in the form of 800 “Kalibr” cruise missiles or 480 BM-30 “Smerch” more? Indifferently. One thing is clear: this is money for a death machine that has no intention of stopping.

What exactly allows the Russian operator to feel “smarter” than the authors of the sanctions packages? Russian terrorist business did not reinvent the wheel. A popular scheme for bypassing economic restrictions was used, which, among other things, is used by Iran (until recently, the leader in the number of imposed sanctions).

The scheme is straightforward and consists in transferring assets under the jurisdiction of the UAE. Back in the spring, JSC “Sovcomflot” moved 90 of the 110 vessels of its fleet to the management of the affiliated company SCF Management Services Dubai LTD, which operates under the jurisdiction of the UAE. More interesting next. To confuse the origin of the ships and the producer of the oil they carry, SCF Management Services Dubai LTD changed its name to SUN SHIP MANAGEMENT. Perhaps, at first glance, such changes affect something. However, if you look more closely, the founder of the specified company remains SCF Overseas Holding — the structure is affiliated with “Sovcomflot” JSC. So, the name change does not fundamentally affect anything. All paths lead to the Russian JSC “Sovcomflot”. Analysis of open sources (MarineTraffic, Equasis, MyShipTracking) shows that, currently, 74 Liberian-flagged tankers registered with SUN SHIP MANAGEMENT continue to transport Russian oil. The American company Liberian International Ship & Corporate Registry (LISCR) is responsible for registering and accounting for ships under Liberia’s flags.

They even received an answer: the Liberian International Ship & Corporate Registry is keen to keep in touch and understand the SCF Management Services Dubai LTD situation. But to date, the Liberian International Ship & Corporate Registry (LISCR) has not left the corresponding flag registration of the vessels belonging to the affiliated JSC “Sovcomflot” company. Aren’t accomplices of terrorism being dealt with in too much detail and, as a result, slowly?

What do we have? The American company Liberian International Ship & Corporate Registry (LISCR) undoubtedly helps to bypass the sanctions restrictions imposed by the USA on Sovcomflot JSC. This looks as absurd as possible because the introduction of US sanctions against a Russian company helps to bypass none other than (!) an American company. It is hoped that the US regulatory authorities will intervene in the situation and do everything to comply with the sanctions restrictions and stop American residents from supporting terrorist Russia. We are waiting. And every day, this expectation increases the number of APCs, “Kaliber” cruise missiles, “Tornado” rockets, and other weapons that will be purchased with bloody money from oil transfers and sent to peaceful Ukrainians.

This publication was prepared by the Information Agency “Underdog” The Unlawyers” exclusively for the project “Don’t Fund Russian Army”.