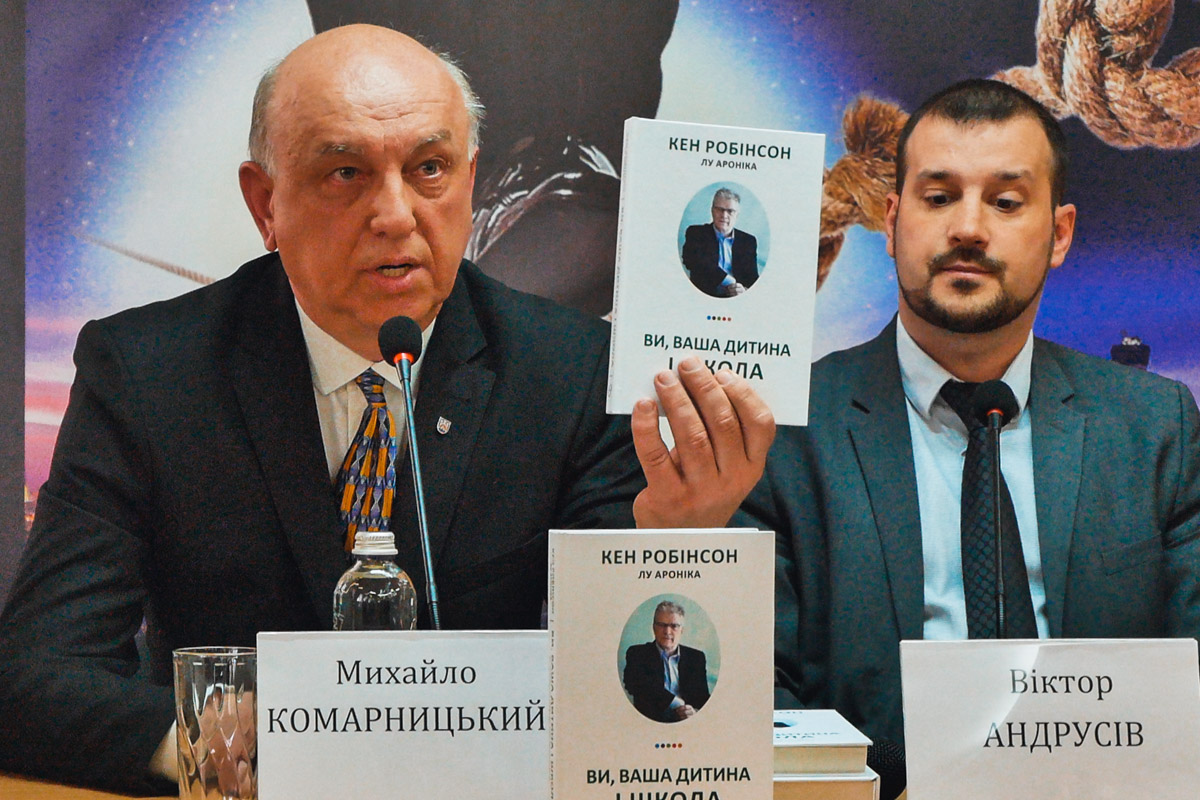 On April 17th at the think tank Ukrainian Institute for the Future (UIF) was hold a presentation of the Ukrainian translation of Ken Robinson’s book “You, Your Child and School”.

The Deputy Minister of Education and Science of Ukraine Pavlo Khobzey, the Expert of the Ukrainian Institute for the Future in Education Mykola Skyba, the Director of the Publishing House “Litopys” Mykhaylo Komarnytskyy, the Founder of the Public Organization “Osvitoriya” Zoya Lytvyn took part in the presentation of the publication.

During the event, the guests had a possibility to get acquainted with a series of publications by Robinson and discuss topic problems of upbringing, education and studying.

The Ukrainian translation of a new book of the author of the best-selling series on education appeared in Kyiv almost simultaneously with the original with the assistance of the Ukrainian Institute for the Future.

Education in Ukraine is at the stage of cardinal changes, the main thing in education is not the process, but the personality of the child, his/her emotions and preferences.

Mykols Skyba, Expert of the Ukrainian Institute for the Future in Education:

“Success is not the peak of life. The peak is a feeling of completeness of life and living, that what we call happiness.

I found a brilliant definition of happiness in Robinson, he quotes Seligman (a psychologist-positivist). The formula is as follows: happiness is pleasure, positive emotions, plus engagement and plus meaning. When all these three components are present in the learning process, education becomes qualitative.

While reading the first chapter, do not “run through” the familiar concepts. Pay attention to the difference between the concepts “education” and “learning.” Learning as opposed to education – is a natural process. The research behaviour is peculiar to animals as well, this is a mechanism that is tied to our neurophysiology, it is something that gives a strong sense of satisfaction.

Robinson has a wonderful sense of humour. He insists that childhood is not a rehearsal of life, this is life itself. He speaks ironically a lot. It’s worth reading. “

Value of publication for educational reform

During the presentation, all the speakers noted that Robinson’s ideas are extremely important for modern Ukraine, where consumer preferences regarding the quality of education have not yet formed in a relatively short period of independence.

Khobzey presented the translation of Robinson’s book at the Ukrainian Institute for the Future. Photo by kiev.informator.ua/Maxim TORPAN

Pavlo Khobzey, Deputy Minister of Education and Science of Ukraine:

According to the Deputy Minister, year 2019 will be devoted to preschool education and development of the New Ukrainian School.

“I would like this book to stimulate us to a responsible parenthood, a parent movement in Ukraine. We must understand that the state cannot take everything upon itself, and we are ready to build a community around the school through the engagement of active parents. This book gives a lot of valuable examples of such engagement. “

“I’m very glad that this book was published. This is the first edition, which can be called an instruction for action for responsible parents.”

Viktor Andrusiv, Executive Director of the Ukrainian Institute for the Future:

“Ken Robinson talks about the importance of public schools. The argument he used is very important for us, the Ukrainians. Public schools, in fact, were created in the United States of America. That is by Americans themselves. Why?  Because in past it was a country of migrants, they came, they were crowded together, they were in their language environment, they were brought up and communicated very weakly.  The school has united children from different groups into one class and thus they became a society. Ukraine also experienced a certain transformation and a school could become a centre of solidarity for the citizens. “