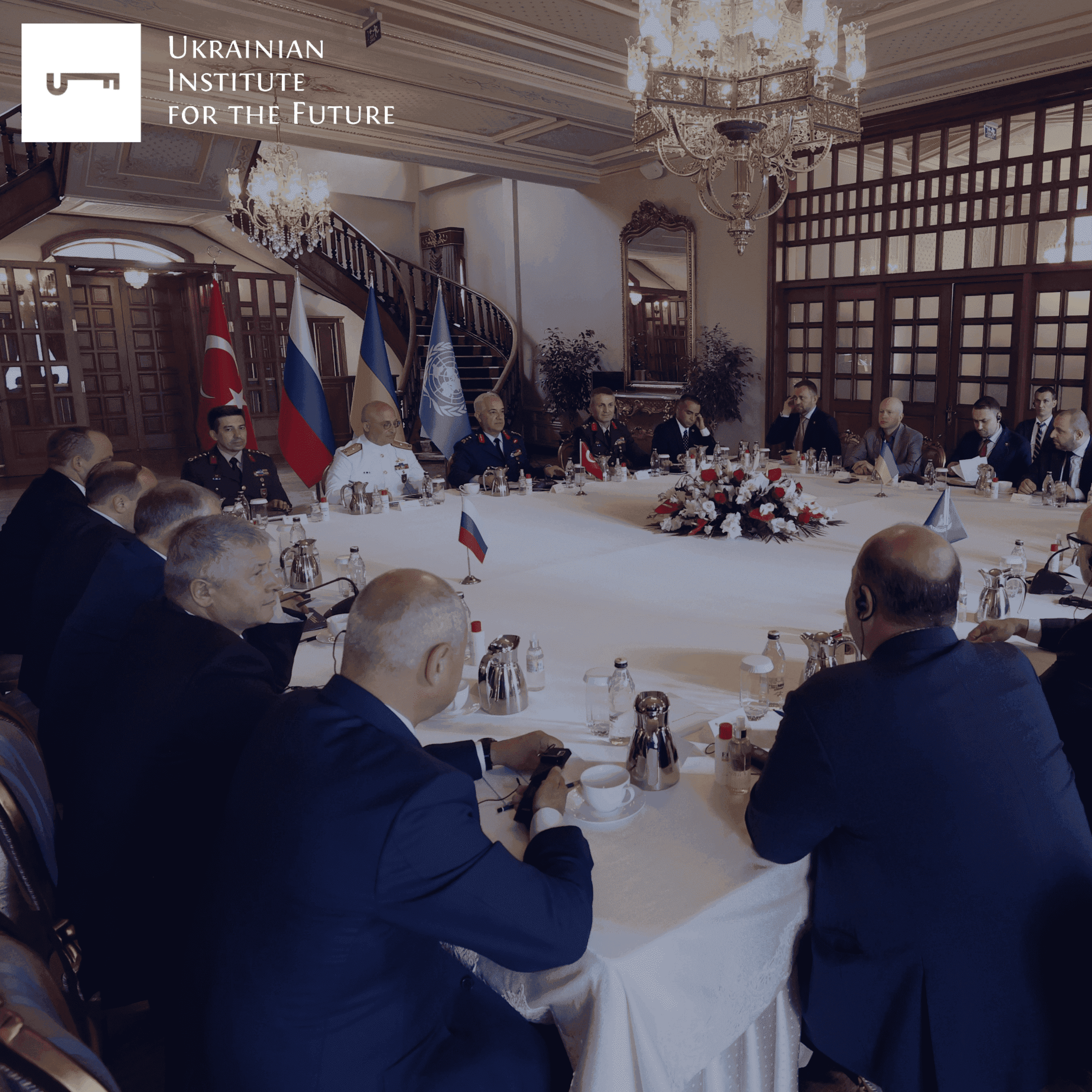 Personnel policy in the Russian Federation: the involvement of Putin’s daughter in politics and a game in favor of two clans

A group of technocrats and their allies (Patrushev) continue to strengthen their positions in Putin’s entourage. Last week, a few personnel changes occurred in the Ministry of Emergency Situations. In particular, in the form of loud arrest “signals”, Gazprom and Rosneft groups were given signals.

Shortly, we can expect personnel changes in several state-owned technological companies (including Roscosmos) and the continuation of the purge in the Federation subjects’ leadership.

Manturov had the “patronage” of two groups that have become closer (and most often act in coordination) in recent years — Chemezov’s “Rostech” group and the group of technocrats. Its strengthening is associated with the redistribution of powers within the government and the interception of some of the areas previously supervised by Borisov. Manturov devoted a third of his speech in the State Duma to the development of the defense industry.

On July 15th, Putin appointed Borisov, a protégé of the army lobby in the government, as the Chairman of the state corporation “Roscosmos”, having previously removed him from the post of Deputy Prime Minister. This indicates a gradual decrease in Dmitry Rogozin’s influence (who was substituted by Borisov as the general director of “Roscosmos”) in Putin’s circle.

Manturov’s essential task is organizing the “import substitution” system. However, the nature of his speeches, the interview with “Kommersant” (published on July 14th) speaks of the priority of the military sphere and areas adjacent to the defense industry. Here, the introduction of Putin’s daughter, who will deal with developing technological cooperation with Asian countries, into government programs does not seem accidental. Formally, Mrs. Tikhonova will not be an official. A significant share of government projects will pass through RSPP, as well as from parallel imports and the search for technological partners. The head of the RSPP, Shokhin, started his career back in the 90s and comes from the close circle of Yeltsin’s “family”.

Therefore, in light of the “squeezing out Yeltsin’s family” policy, Putin needed an observer in the RSPP who could be trusted. The daughter is a good candidate, which satisfies the group of “technocrats” and Kiriyenko personally due to the good contacts developed in 2017-2020.

Thus, we can also assume that Putin gradually involves his daughter in politics. After all, the sphere of her employment will closely intersect with international relations, particularly in cooperation with China and India, which are key countries for Russian Federation’s technological development.

Examining the cases of high-profile arrests, one can also see clear patterns. The former Deputy Minister of Emergency Situations is accused of building a mobile hospital not designed for a cold climate in Murmansk during the COVID-19 pandemic. This is probably a formal reason for his dismissal since this “criminal trail” allowed Patrushev’s group to introduce close people to the ministry. Alexander Chupriyan, Putin’s former aide-de-camp, served as acting minister (after Zinichev’s death) for a short time. However, in May 2022, Alexandr Kurenkov, a graduate of the Federal Security Service of the Russian Federation (formerly Zolotov’s deputy for combat training), was approved as minister. Alexandr Gurevich remained one of the department’s strong opponents, who oversaw a key area — material and technical support. The removal of the latter (especially with the scandal) put the department’s financial flows under the control of the new minister and made it possible to appoint his deputy.

The second case involving the arrest concerns the former deputy governor of Tomsk Oblast, Yuriy Gurdin, who was responsible for implementing investment programs and national projects during his tenure. He is accused of embezzlement. However, this is not a blow to him but to Sergey Zhvachkin, who left the governor post in May 2022, as well as a signal to the acting head of the region Vladimir Mazur. Thus, the criminal case against Gurdin is a blow to Gazprom’s interests and a warning signal to the acting governor on the eve of the voting day.

Patrushev and a group of technocrats continue the policy of increasing their influence. They do not claim the “first positions” yet, focusing their efforts on real (rather than formal) control over processes — they change deputies, heads of departments in individual departments, and carry out a policy of changing heads of regions. Manturov is most likely an exception to the rules, without which it would be impossible to control financial flows under import substitution programs.

In the coming weeks, we should expect the continuation of the “governor purge” process. Given the approaching voting day, resignations are no longer so likely. But media attacks and the appearance of new “alternatives” to the regional leaders in 5-6 subjects of the Federation are possible.

In particular, Gazprom’s influence on the decision-making system will gradually weaken.

Quadrilateral negotiations on grain export from Ukraine to world markets brought the first results, although the matter has not yet reached a formalized agreement. Judging by the parties’ statements, the general idea of a “grain corridor” in the Black Sea, which would ensure the export of Ukrainian grain from the Black Sea ports through the mediation of Turkey and the UN, was agreed upon. However, the key questions that will allow practical steps to be taken remain undefined.

In particular, the issue of port demining, which was the cornerstone of the negotiations in which representatives of the military departments participated, was left out of the picture. Creating a coordination center in Istanbul to oversee the grain export operation does not answer the question of who will clear the ports and how so that the grain can be safely exported. According to anonymous sources in WSJ, Ukraine is allegedly partially demining the ports. Moreover, a “security zone” will be created in the Black Sea, through which warships, most likely Turkish ones, will accompany ships with grain.

So far, it appears that all parties are constructive and willing to cooperate to improve the situation in world food markets. However, the real intentions of the parties differ. More than anyone else, Turkey is interested in the “grain corridor”, for which it is a matter of prestige, and reputation, covering its own needs, additional profit, strengthening its regional positions, and closing one of the key aspects of the negotiation process in the war in Ukraine. In Ukraine, the export of grain is necessary to avoid a crisis with the next harvest and to unblock at least partial exports to attract additional money to the budget. On the other hand, port demining can become a potential vulnerability for Ukraine in light of the ongoing hostilities.

Russia uses grain as a tool of political bargaining and blackmail. In exchange for unblocking the grain export, Moscow will demand a partial easing of sanctions from the West, show its “constructiveness” in the negotiations, and use it as a bargaining chip in talks with Middle Eastern countries that are interested in resuming grain exports from Ukraine. This can be done, for example, in exchange for concessions on energy issues or for maintaining neutrality, which works for the Russian Federation and allows it to play an essential role in the world’s oil and gas markets. From Moscow’s point of view, unblocking the export of grain may be reasonable in terms of the situation in Ukraine because:

The contours of a possible agreement, such as, for example, the easing of restrictions on the export of fertilizers from the Russian Federation announced by the United States, allow the Kremlin, in addition to the above, to receive several bonuses in the economic sphere:

In 2022, negotiations were held regarding the export of Ukrainian grain instead of discussing the shipping blockade in general. The problem remains unresolved in the complex, becoming a non-priority topic for discussion. The Russian Federation, for its part, demonstrates its “ability to negotiate” by receiving concessions in essential areas (trade, fertilizers, etc.). This approach may be successful and give Russian lobbyists in the EU arguments about the need for “consultations” with the Kremlin and the end of the war in Ukraine due to the concessions that Kyiv must make. From the point of view of “shredding the problems”, we can expect a division of the DNR and LNR cases, Crimea, Kharkiv Oblast, and Southern Ukraine. Ukrainian authorities must prepare for this challenge.

Russia-Iran relations: partnership for the sake of competition

This week the US provided a news release about Iran’s alleged readiness to supply Russia with drones for the war in Ukraine. The first source of this news was the US President’s National Security Advisor, Jake Sullivan. This story did not receive any confirmation, and the Ministry of Foreign Affairs of Iran, although rather superficially, denied these data.

Nevertheless, this week Moscow announced the visit of Vladimir Putin to Iran. He will arrive at the “Astanin Troika” summit — Iran, the Russian Federation, and Turkey — and will hold talks with the presidents of both states.

Russian-Iranian relations have undergone some changes since the beginning of the war in Ukraine. Tehran and Moscow have not abandoned their situational partnership based on joint anti-American rhetoric and opposition to Western influence. The more Western countries pressure Iran, the more it motivates Tehran to drift closer to Russia and China. The only thing that can keep the Iranians at bay is the belief in reaching an agreement with the West on its nuclear program and, as a result, lifted American sanctions, followed by access to global energy markets. But recently, the belief in the success of the negotiations is weakening, and the introduction of new US sanctions against Iran is driving the negotiations even further to a dead end. Russia will use this to try to keep Iran in the anti-Western camp.

On the other hand, Iran perfectly understands the risks associated with excessive rapprochement with Russia, and even more so with supplying it with weapons. As long as the “nuclear negotiations” with the USA continue, the Iranian authorities are unlikely to take risks by providing military assistance to the Russian activities in Ukraine. Moreover, Iran is not interested in the excessive strengthening of Russia as a result of the war in Ukraine. For Tehran, the Russian Federation is a situational partner when it comes to the global containment of American influence, while in regional affairs, Russia is considered a rival. The weakening of the Russian Federation as a result of the war in Ukraine is seen in Iran as a chance to extract concessions from Moscow on regional security issues, such as persuading Russia to allow the Iranians to increase their presence and influence in Syria, especially given the deterioration of relations between the Russian Federation and Israel in recent months. In addition, the  30% discounts that Russia offers to China and India, as oil importers, amid Western sanctions, are crowding out Iranian oil because Tehran cannot afford such discounts.

The visit of the President of Russia to Iran on July 19th will be extremely important in determining the format of bilateral relations. Russia is interested in maintaining its partnership with Iran and possibly using it to circumvent Western sanctions. On the other hand, Iran seeks Russia’s support in “nuclear negotiations” with the United States, and concessions in Syria and Yemen, realizing that the United States will now build a pro-American coalition in the region, which is not beneficial to either Iran or Russia.

Ukraine does not play a significant role in these schemes. Iran maintains neutrality regarding the war in Ukraine and is unlikely to assist the Russian Federation in the war against Ukraine. However, separate agreements in the military-technical sphere are possible if they are acceptable to both countries. However, there are many risks for Iran. As long as there is faith in lifting Western sanctions and successful negotiations with Washington, the Iranians will not be exposed to additional sanctions.