» News » With new president on the way, what’s next for Viktor Medvedchuk? 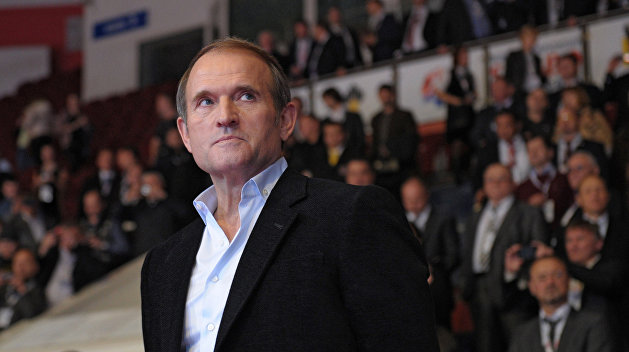 Over the course of multiple presidential administrations, oligarch Viktor Medvedchuk built a business empire in Ukraine and capitalized on his role of an unofficial intermediary with the Kremlin.

As Volodymyr Zelenskiy prepares to begin his presidency, analysts suggest that this is an opportunity to cut down Medvedchuk’s intermediary role, which allows him to be Moscow’s “eyes and ears” in Ukraine.

But Medvedchuk and his wife Oksana Marchenko have broad business and political connections, and Medvedchuk chairs the political council of the country’s Russia-friendly Opposition Platform — Za Zhyttia party. He will undoubtedly resist moves to limit his influence. His influence in Ukraine derives from his personal friendship with Russian President Vladimir Putin.

“Zelenskiy also needs communication channels with the Kremlin,” Ilya Ponomarev, a former Russian lawmaker and current exile in Ukraine, told the Kyiv Post. “This is an opportunity to do everything properly, because Medvedchuk is a bad intermediary. He is a broken telephone.”

Reached by phone, Medvedchuk spokesman Oleg Babanin declined to comment on the record.

Zelenskiy’s team also did not answer the Kyiv Post’s questions about Medvedchuk. However, the president-elect has previously stated that he will exclude Medvedchuk from negotiations with Russia.

In a separate media interview, Medvedchuk said that he wasn’t “sending greetings” from the Ukrainian President Petro Poroshenko to Putin — as Zelenskiy once alleged — but negotiating in Ukraine’s interest, especially regarding the release of 24 Ukrainian sailors captured by Russia during its attack on the Ukrainian boats in the Black Sea in November.

After the presidential election, Medvedchuk suggested that Zelenskiy negotiate with Russia and make a deal to bring about peace with Moscow and the Russia-occupied areas of eastern Ukraine. Despite that, Medvedchuk said he isn’t planning to offer any help to Zelenskiy. However, some analysts disagree, saying Medvedchuk is unlikely to willingly give up his intermediary role.

“There will be this game where Medvedchuk will try to offer his services to Zelenskiy as an unofficial intermediary to Putin,” political analyst Volodymyr Fesenko told the Kyiv Post.

Fesenko added that Zelenskiy is probably uninterested in Medvedchuk. However, if Medvedchuk’s services are rejected, he might plot against Zelenskiy, the analyst said.

“He may seek contacts (with Zelenskiy) through (oligarch Ihor) Kolomoisky, to convince him to use his services,” Fesenko said. “This will be about the exchange of (captive) sailors. It’s his favorite topic. He will try to play this card.”

Protesters demand government action against oligarchs and politicians with Russian connections, including Viktor Medvedchuk, pictured on the banner, during a rally near the Verkhovna Rada in Kyiv on Jan. 16, 2018. (Volodymyr Petrov)

Zelenskiy has been linked to Kolomoisky, whose television channel broadcasts his comedy shows. But the president-elect denies that this relationship extends beyond business. For his part, Medvedchuk told journalists last year that he does not know Kolomoisky well and only spoke to him once.

Ponomarev said that Poroshenko valued having a direct line of communication with Putin and wanted to avoid retaliation from Russia against his business interests. This may be less important to Zelenskiy, who also lacks Poroshenko’s relatively close relationship with Medvedchuk. Ukrainian journalists spotted the president and the oligarch meeting several times, including in Poroshenko’s private residence.

Poroshenko previously denied critics’ assertions that he was helping Medvedchuk and his wife’s business empire to flourish.

Glen Grant, a defense expert with the Ukrainian Institute for the Future, harshly criticized Medvedchuk, whom he termed “completely untrustworthy.” He called on the politician to stop playing both sides and decide if he will be a Russian ambassador or a Ukrainian who is fully divested of all his Russia-related holdings.

“There has been no evidence to suggest change,” in what Medvedchuk is doing, Grant said. “I’m hoping that the body of honest people trying to work with Zelenskiy will make this very clear to him… This current situation is wrong.”

Ongoing construction at the Gavrykovsky oil deposit in Russia’s Khanty-Mansi Autonomous Okrug in October 2018. The company that won the tender to extract the oil is linked with oligarch Viktor Medvedchuk’s wife, Oksana Marchenko.

Medvedchuk’s celebrity wife, former TV host Oksana Marchenko is the primary official beneficiary of the business empire she shares with her husband. She owns investment companies Ukrcapital, Terra-Invest and Sport Tour. Through them, she owns a number of other firms and properties, including ones in Crimea.

Some of Marchenko’s companies have links to Ukrainian, U.K. or Cyprus companies which, through their employees, were connected with offshore companies associated with allies of the disgraced ex-President Viktor Yanukovych and named in embezzlement investigations.
For example, one of the founders of Marchenko’s company Ukrcapital is the U.K.-based Intermay Management. This company lists Anzelika Pasenidou as its secretary. Pasenidou used to be a director on the board of Burisma Holding, the gas company of controversial ex-minister Mykola Zlochevsky, who was investigated for allegedly moving $23 million out of Ukraine. Panesidou is no longer listed on Burisma’s site.

Former TV presenter Oksana Marchenko appears on the show X-Factor in Kyiv in October 2010. She is the beneficial owner of many of the companies in her and Medvedchuk’s business empire. (UNIAN)

Some of these agricultural companies were investigated by Ukrainian courts for allegedly using fictive enterprises for the purpose of tax evasion, as well as arranging transactions worth tens of millions of dollars with U.K. and Cyprus based companies in which no goods changed hands.

Investigative journalists found that a Yalta company controlled by Marchenko’s firms, Tavria Invest, has the same joint director as Russian company Tavria Sever, which is controlled by Cyprus-registered holding companies. This company is linked to an oil and gas extraction company operating in Russia’s Khanty-Mansi Autonomous Okrug, NZNP Trade, which is also linked to a refinery in the Russian city of Novoshakhtynsk. That refinery is alleged to have been sending fuel to Ukraine.

Medvedchuk filed a symbolic libel suit against Hopko after she criticized him on Facebook in September, suing her for Hr 1 compensation.

Critics have also alleged that Marchenko is the beneficiary of all these companies as a way to get around the U.S. sanction on Medvedchuk, imposed in March 2014. Hopko told the Kyiv Post that the U.S. ought to extend the sanctions and also issue them against Marchenko.

The Kyiv Post also reached out to Ukraine’s National Security and Defense Council to see if any sanctions were in the works for Medvedchuk and Marchenko’s foreign holdings. The Council replied with a statement that it will examine any sanctions proposals it received according to established procedure.

Fesenko said that it is still too early to discuss sanctions, and this question will probably wait until Zelenskiy has finalized his plans for the National Security and Defense Council.

Until then, analysts said, Medvedchuk may continue to build up his power base and try to become the main pro-Russia opposition leader in Ukraine. His party, Opposition Platform — Za Zhyttya, came second in an April poll that asked people who they would support in the parliament election, scheduled for October. It received nearly 16 percent of the vote in the poll done by the Kyiv International Institute of Sociology.

Medvedchuk’s allies have also been building a media empire. In 2018, his close ally, a low-profile lawmaker Taras Kozak acquired two TV channels, Channel 112 and NewsOne, in 2018. Many alleged Kozak owns them on behalf of Medvedchuk, which he denied. The influence of this mini TV holding might be a threat to Zelenskiy, according to Grant.

This article was first published on KyivPost.