» News » THE US FRIGATES: TIME TO GET RID OF ILLUSIONS 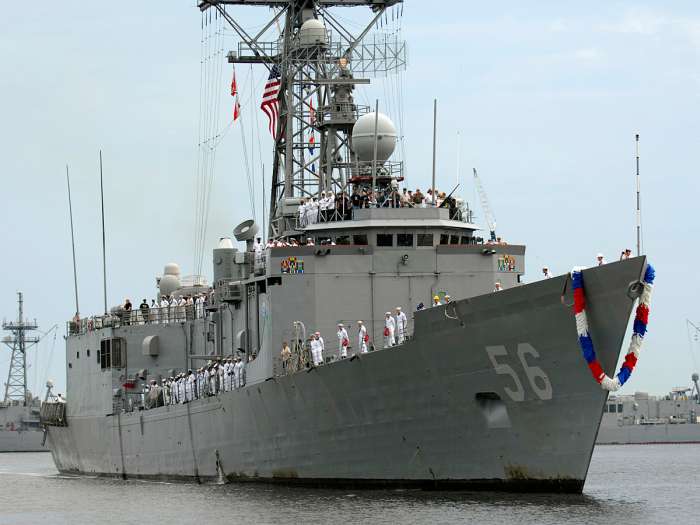 The other day there was news on the Internet that the US is ready to transfer Oliver Hazard Perry frigates to Ukraine. They plan to transfer them under the same program Island-class patrol boats were transferred.

The news caused a strong reaction of the Ukrainian general public. Of course, there were discussions whether we need these frigates at all. The given arguments would be very reasonable in any country where logic prevails in the decision-making process. And in times of war, the priority is to strengthen the country’s defense capability without any nice demonstrative gestures and PR. That is quite different from the Ukrainian reality.

Therefore, I am going to dispel the myths that I had to encounter:

The first argument: “It would be much faster, cheaper and more profitable to buy a Turkish corvette of the MİLGEM project (Ada class) than waiting for  2-3 years until these American frigates will be sent to us, repairing of which would cost a lot of money (at least $ 20 million).”

That is a sound opinion. But the problem is that Turkey has constructed only 4 of 12 corvettes that were planned to build in 2005 so far (only 2 got into the water). And they’ve all been sold to Pakistan. In 2013 the project was frozen.

The second argument:  “It is necessary to focus on hidden and mobile coastal missile systems”.

Of course, during the escorting of merchant ships to the ports of Mariupol and Berdyansk and preventing their detention by the FSB fleet, they will help us “greatly”. Especially since they are still being tested (as I understand it was about the installation of “Neptune”), and the next stage of testing is scheduled for April-May 2019. So it is still far from the start of their mass production.

The third argument: “The Black Sea Fleet will sink them (Oliver frigates) and will make fools out of us”.

That is a good argument to justify doing nothing. It seems that Muzhenko used similar words recently to argue the reluctance to escort merchant ships in the Azov Sea because this entails risk and may cause a worsening of the situation. The risk is really there. But it is much more dangerous not to do anything and that is what we have been successfully doing for the last 4 years.

The fourth argument: “We have nothing to equip the frigate with now. And those rocket launchers that are available in Ukraine are in development so far.”

That is also true. “Neptune” missiles are now only being tested and not ready for mass production yet, but the transfer of the frigates should not be expected before 2021, considering how long we were solving issues connected with the Island-class patrol boats.

I expected to hear the argument that Oliver frigates may be too large for the shallow Sea of Azov. I have noticed this after writing the article when learned that their draught (height of the ship under the waterline) is 6.7-7.7 m, while the average depth of the Azov Sea is 8 meters.