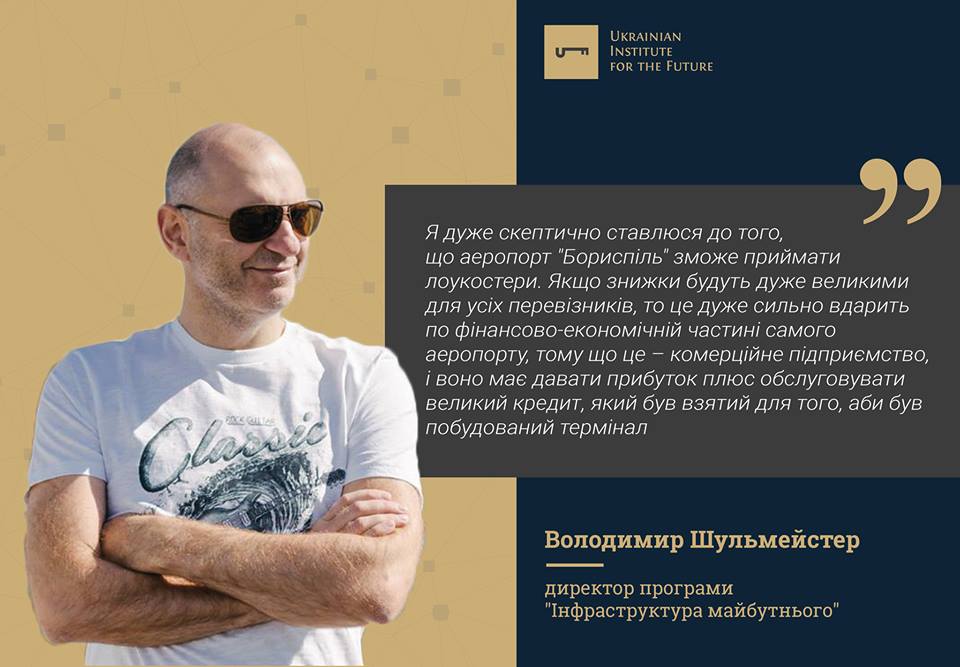 Volodymyr Shulmeister, director of the program “Infrastructure” of the Ukrainian Institute for the Future, admitted that he is skeptical about the possibilities of the international airport “Boryspil” to accept low-costers.

Besides, Shulmeister explained that a discount of 80% on airport fees is impossible, commenting on the air at the radio station “Voice of the Capital” the statement of Pavlo Ryabykin, the head of the airport “Boryspil”.

“There is a dependence of the amount of the discounts on the number of carriages. The more the carrier transports passengers, the more discounts it has, but the amount of discounts is regulated not only by the airport, but also by the Ministry. Two weeks ago I met Ryabykin [Pavlo Ryabykin – the head of the airport “Boryspil” – editor’s note] and he said that now they depend on the Ministry, on how quickly they will regulate the question of the maximum amount of discounts that the airport can provide to airlines”, explained Shulmeister.

According to him, the issue of discounts should be treated very carefully.

“If the discounts are very large for all carriers, it will dramatically hit the financial and economic part of the airport itself, because it is a commercial enterprise and it should make profit, and also to service the large loan that was taken to build the terminal. That is why I am very skeptical about the fact that the airport “Boryspil” will be able to receive low-costers”.

The expert also commented on the fact, given by the “Voice of the Capital” journalists, that on the web-site of Ryanair it is already possible to purchase tickets for flights from Kiev.

“It’s amazing. We still don’t have an agreed route, and for this Ryanair should have visited State Aviation Service, where twice a month they have commissions and distribute directions. This is the first thing they should have done, and secondly – they had to agree with any airport, and this is a commercial question. I cannot understand how they could sell tickets on the web-site until these conditions are fulfilled. I guess, they will return money if anything”, summarized Schulmeister.