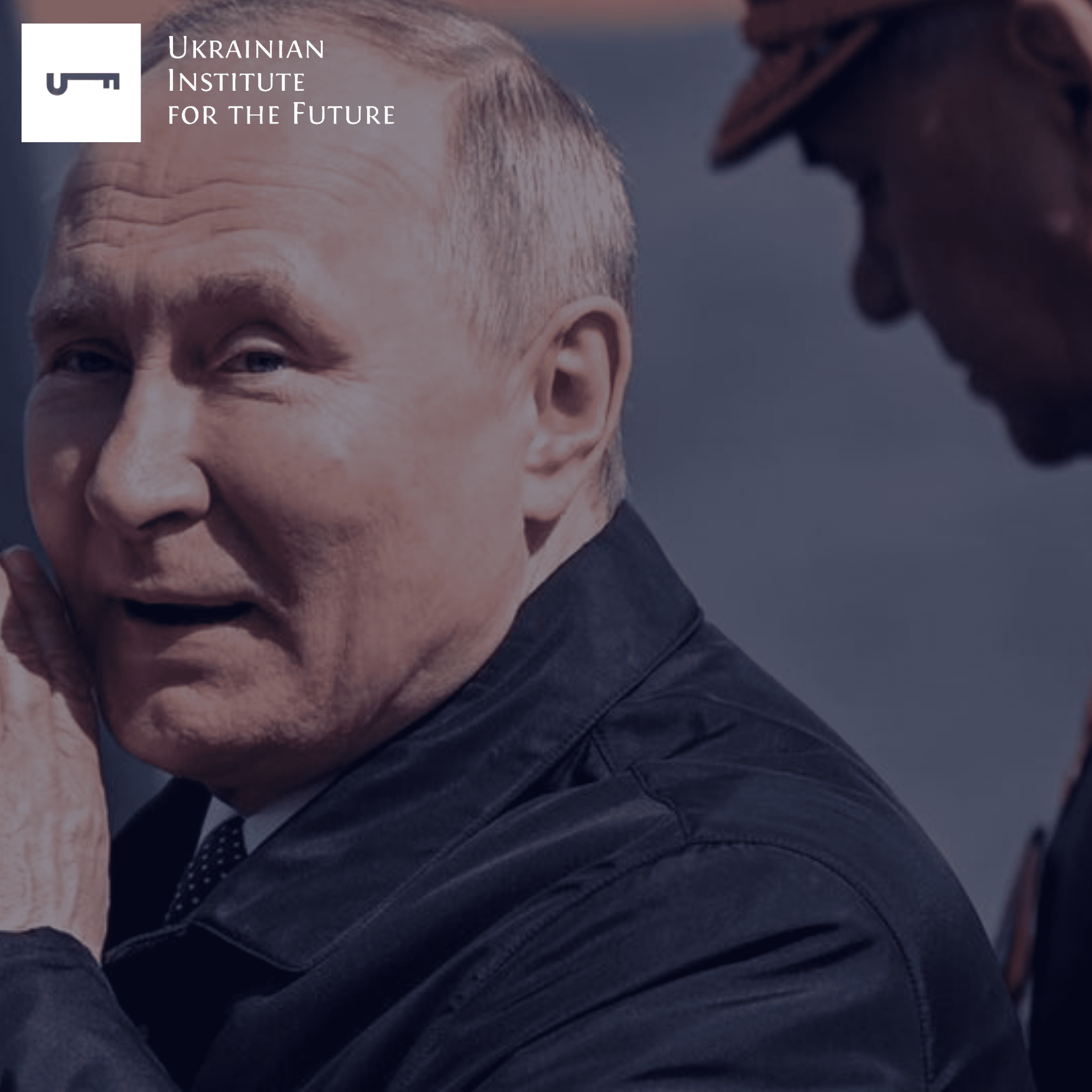 1. The events of the past seven days allow us to conclude that the “audit” of the Ukrainian direction policy is partially completed, and Russia is beginning to take over the Ukrainian occupied territories. The process will be overseen by a group of Serhiy Kiriyenko’s “technocrats-methodologists”, who will become one of the key figures in Putin’s entourage throughout the next 1.5-2 years. This affects not only the issue of war in Ukraine but also the domestic political processes in Russia, where the “return of land” will be presented as an achievement, fulfillment of a “historic mission”, and at the same time, will justify the deterioration of ordinary citizens.

2. Russian-Turkish talks in Ankara have culminated in partial agreements on Turkey’s operation in Syria: it will be limited and unlikely to affect vital areas for Russia. At the same time, the parties disagreed on a “grain corridor” with Ukraine due to Russia’s lack of interest in it, trust between the parties, and Moscow’s desire to prolong the grain issue for as long as possible to obtain more significant concessions from the West.

3. The concept of “national humiliation” is one of the most important in any authoritarian propaganda. The Nazis justified their policy pointing at Germany’s humiliation in Versailles. Putin is now speculating on Russia’s “humiliation” in the 1990s. Thus, whenever someone in the West speaks earnestly about the inadmissibility of “humiliating Russia,” they automatically combine their voice with those in Russia. Statements about the “bad” West, which is only looking for opportunities to humiliate someone, have become an integral part of Russian media. Every such phrase from a foreigner automatically confirms that the “humiliation” allegedly occurred. It justifies the “getting up from the knees” actions in response to this “humiliation.” The careless remarks of Western politicians, who do not consider the context of Russia’s perception of “humiliation”, only legitimize the Kremlin’s policy in the eyes of the Russians and thus contribute to the escalation of the war.

4. Since the beginning of the large-scale war in Ukraine against Russia, restrictive financial and trade sanctions have been imposed by the United States, the United Kingdom, the EU, and others. The list of sanctions is quite extensive, but the possibilities for increasing pressure and imposing new restrictions have not yet been exhausted. The sanctions imposed so far have not led to the catastrophe and collapse of the Russian economy. As long as Russia can circumvent sanctions through cryptocurrencies and parallel imports, maintain significant oil and gas revenues, and trade and financial relations with China, India, Africa, and Latin America, the effect of sanctions on Russia’s economy will be long-term. Sanctions have begun to touch upon the Russian sentiment but are still insufficient to end military aggression in Ukraine.

5. A sharp strengthening of the Belarusian Armed Forces in 2022 should not be expected. Statements about the creation of a new operational command in practice will mean the formation of territorial defense units along the Ukrainian border with the transfer of part of the equipment taken out of storage. Some of this equipment can be sold to Russia and later used by the Russian army in Ukraine. The Belarusian authorities have drawn conclusions from the war in Ukraine and changed the concept of developing their own armed forces. Their defense capacities will be significantly adjusted in the next 6-8 months. Most likely, the funds, which were supposed to be spent on arms imports, will be redirected to finance the purchase of military products by the Belarusian enterprises.

As expected, Kiriyenko’s audit of the Ukrainian policy led to the personnel decisions. As a result, the “DNR government” was altered, and in 1 day, a new “deputy prime minister” was appointed to the “LNR government”. In both cases, the newly appointed people are citizens of the Russian Federation. Despite significant differences in their careers, they both belong to a group of Russian technocrats.

The situation is different in the occupied parts of Kherson and Zaporizhia oblasts. To hold a “referendum”, Russia can use the army, Rosguard, and their locally controlled collaborators. However, the process must be given some sign of “legitimacy”, and the elites’ consent to Russia’s actions (takeover) must be demonstrated. For this reason, Oleksiy Kovalyov’s case is crucial. Russia will do everything possible to increase the number of such public figures supporting “Russia’s arrival.”

The Kremlin’s decision to annex the occupied territories suggests that this issue is vital in strengthening the central government. The population will be offered the ideology of “restoring the greatness of the country” and “strengthening Russia’s sovereignty.” Specifics (such as documented decisions or referendums), may appear as early as the fall of 2022. Another possible plan is to “annex” in parts – firstly, the LDNR, then (possibly) South Ossetia and/or other occupied territories of Ukraine.

At the same time, Kiriyenko will oversee both the preparation of “local referendums” in the occupied territories of Ukraine and the election campaigns in Russia alongside a group of other technocrats. This group in Putin’s surrounding aims to strengthen its positions in the next 1.5-2 years. They will do so up to claims for a higher positions in the government of Russia (or as a result of Putin’s departure, or a “palace coup” in case of negative for Russia ending of war in Ukraine).

In the coming weeks, Russia will be actively involved in creating political infrastructure in the occupied territories of southern Ukraine. To do this, they will select (look for) Ukrainian politicians and/or business people ready to work for the Russian Federation. Unlike in the previous months, when such people hid their sympathies for the occupiers, now they will be made as public as possible, thus cutting off “ways to escape.” Such a practice (if successful) can also be used as a mechanism to demoralize part of Ukrainian society.

The decision to hold referendums will be made no later than mid-July. In this case, the actual “voting” falls during the period of the election campaign in Russia. However, the decision to annex the “new territories” in 2022 may be limited to only LDNR’s annexation. It can also be postponed to early 2023.

The Kremlin has decided on the future annexation of the occupied territories of Ukraine. The process will be overseen by a group of Sergey Kiriyenko’s “technocrats-methodologists”, who will become one of the key figures in Putin’s entourage throughout the next 1.5-2 years.

2. Grain talks between Turkey and Russia

On June 8th, the important talks took place in Ankara between the foreign ministers of Russia and Turkey. Two topics were vital: the export of grain from Ukraine and Turkey’s military operation in Syria.

According to the parties, it was impossible to agree on the “grain corridor” proposed by Ankara. Several factors make it difficult to reach agreements on this issue.

The first is the lack of trust between the parties. Russia’s proposals to provide verbal guarantees of non-aggression against Odesa in the event of a port demining to create a “grain corridor” are ineffective, as neither Ukraine nor Western countries trust such guarantees. The second is Russia’s lack of serious desire to deal with this topic. Unlike European countries, for which food security and the stability of the neighboring regions – the Maghreb, sub-Saharan Africa, and the Middle East – is a significant challenge, this crisis is not critical for Russia. Moscow can afford to wait and continue to blackmail the West until it agrees to more acceptable conditions to unblock grain exports, such as lifting or easing sanctions. Third, Russia does not need a quick solution to the “grain problem.” Moscow intends to delay this process while building a narrative through the controlled media about the “uncompromisingness of Ukraine, which does not allow the export of grain to world markets.”

On the other hand, one cannot say that Russia is absolutely against grain export under any circumstances. Its leadership is raising the stakes on the political and economic agendas and playing this card with several key outsiders: with the West – by demanding a reduction in sanctions pressure or, at the very least, the non-acceptance of new sanctions packages; with Turkey – by pressing that its military operation in Syria be limited to areas that are not important to Russia; with the Arab monarchies of the Gulf – by demanding concessions on the global energy policy, such as maintaining Russia’s position in the new OPEC+oil agreement; with the countries of Africa and South Asia – by demanding their non-accession to Western sanctions and restrictions in exchange for ensuring a reliable supply of grain to markets. As soon as the conditions acceptable for Russia are met, Moscow can agree to the “grain corridor” proposed by Turkey.

The second topic, raised during the Turkish-Russian talks, turned out to be more informative. According to Lavrov, Turkey has succeeded in persuading Russia to allow it to conduct a limited military operation in several areas in northern Syria against local Syrian Kurds, backed by the United States and Western partners.