» News » A small French revolution: what became clear after the presidential elections’ first round results 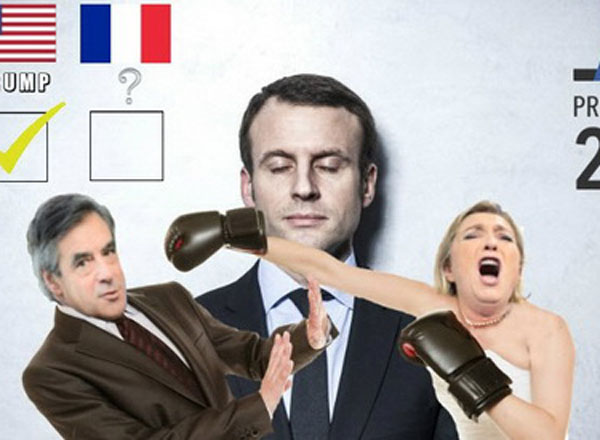 Nadiya Koval for the “European Pravda”

The first round results of the French presidential elections will be officially announced on Wednesday, April 26, by the Head of the Constitutional Council Laurent Fabius.

However, the doubts about the second round participants were almost gone an hour after the polls closed. Pro-European Centrist Emmanuel Macron (En Marche! (Onwards!)), and right-wing populist Marine Le Pen (National Front) are through to presidential run off in the final of a long and unpredictable campaign.

Despite pronounced carefulness at the finish, when the four candidates kept theoretical chances of getting into the second round, and when various confrontations options were seriously discussed, the French sociologists defended the honour of the profession. The results of the calculations showed 23.75 per cent of votes for Macron, 21.53 per cent for Le Pen, 19.91 per cent for François Fillon (the “Republicans”), and 19.64 per cent for Jean-Luc Mélenchon. It almost entirely corresponds to the poll published during the last week. French sociologists could conduct several workshops to their British and American colleagues.

For Emmanuel Macron who burst like a comet into the election race, such a result is a tremendous success. Last fall, his candidacy was perceived like a bubble which has no chance against political mastodons.

Read: Macron, the one who dished the Kremlin’s schemes: who he is, a new leader of the presidential race in France

However, visionary centrist pro-European platform that denied division into the rightists and the leftists, together with an attractive image in the media highlighted him at the traditional political field.

The rest has been done by his rivals themselves. The victory of the Republicans’ conservative wing in the primaries, and especially the following corruption scandal involving Francois Fillon allowed Macron to entice the votes of moderate rightists. Francois Hollande refusal to stand for election and the victory of the Socialist Party of the radical frondeur Benoît Hamon in the primaries gave him the votes of Leftists. And the support from François Bayrou, candidate who participated with centrist platform in several previous presidential races, helped to consolidate these votes.

For Marine Le Pen, entering in the second round is the next step in the long-term progress of her party, the “National Front”. If the candidate’s father Jean-Marie Le Pen won less than one per cent during his first stand for election in 1974, in 2002 he managed to throw the socialists out of the second round. However, his almost 17 per cent at that time was the maximum which the party could achieve. In order to overcome the marginality curse and to reach a broader range of voters, Marine Le Pen has made a major reformatting of the “National Front” itself and of its platform.

Although all polls are predicting her imminent defeat, even this outcome will be very positive for the “National Front”, which constantly increases its influence in the French political life.

Read: Elections in France: France: Primaries of the Leftists

Leftist candidate of the Trotskyist past Jean-Luc Mélenchon, on the one hand, has significantly improved his results compared to the year 2012 when he received 11.1 per cent: in Europe, the populist and radical parties are gaining more and more support both from the right and the left.

Having closely approached to the second round this time, the “Undefeated France” could not hold back the frustration and until the last moment refused to admit their defeat. The charismatic candidate is already 65 years old, and he probably has just lost his best chance.

Radical leftist ideas, if one combines the results of all four candidates who were trying to be spokesmen of those ideas, remain attractive for the majority of the French.

The mainstream parties suffered the largest losses: their crisis turned into a catastrophe. Two major forces which triumphantly conducted primaries in two rounds failed even to enter the second round.

Infamous 6 per cent of Benoit Hamon seemingly has doomed the Socialist Party, which almost certainly will now disintegrate into more liberal and more radical wings.

And if the first one can join the Macron’s “Onwards!”, the latter will have to search for its place among French Leftists who “ate” Hamon so easily.

So far it was possible to hold back the contradictions among conservative (Fillon), moderate (Juppé) and sarkozist wings of the “Republicans”, but the party’s integrity will be tested not only by a defeat of the controversial candidate, but also by the parliamentary elections in June.

As a result of a revolutionary change in the political landscape two opposing projects will compete in the second round, each of which embraces a radical break from the previous policy and actually building new France. This contradiction is not so much about the “Leftists” and “Rightists” but more between the “open”, liberal, pronouncedly pro-European vision of the further the development of France – and the “closed”, clearly nationalist and Euro-skeptical vision.

Currently, alarmism concerning the pan-European disaster in case of Le Pen’s victory was replaced by a cautious optimism. Last Ipsos poll, conducted after the results of the first round were published, predicts a comfortable victory of Macron in the second round with 62 per cent of the votes – against 38 percent of votes for Le Pen.

The source of Macron’s decisive advantage in the second round should be the so-called “Republican unity” which is based on principal voting “for” any candidate in order only to prevent the Rightists’ coming to power.

In the evening, a number of Ministers and top politicians from various parties consistently expressed support for Emmanuel Macron. Many of them acted according to the logic which was outlined in Benoit Hamon’s speech: understanding of the difference between a political rival and the enemy of the Republic.

No one of the mainstream politicians dared to directly support Le Pen, although the “National Front” hoped for at least neutrality of the “Republicans”.

But despite the forced Fillon’s appeal to vote for Macron, the same Ipsos poll shows that 33% of Fillon’s voters will prefer Le Pen in the second round.

Thus, the future president will inherit a rather polarized society, in which the request for change became reflected in a collapse of the old parties and a sharp increase in the popularity of leftist and rightist ones. The latter ones stood just one step away of taking over the power in the country.

If the second round passes without surprises, the next presidential five-year plan will become a unique opportunity for this trend to deploy.

This was an extremely complicated task, which proved to beyond Francois Hollande’s strength. We can only hope that his successor will be more successful.