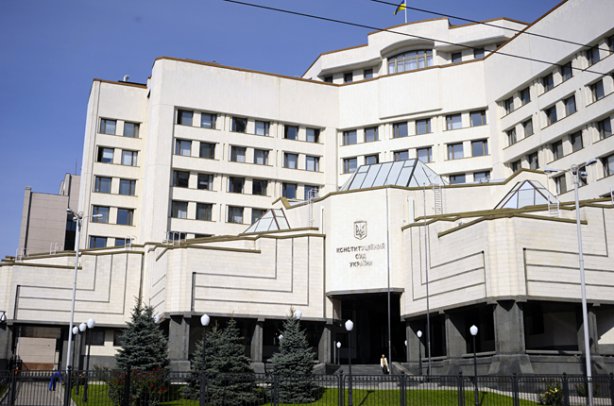 Nevertheless, even this draft (the number of legal requirements in comparison with the current law increased by more than a third), which is quite perfect document, can not be free from certain disadvantages. Let us examine them in detail.

1. First, we note that because the new law applies to the resolution of certain procedural points procedural functioning of the Constitutional Court, it is very important to clearly delineate the scope of the subject, which belongs to the law, from the one that will be decided at the level of the Rules of the Constitutional Court. At first glance, such an attempt has been made, as in art. Bill 3 states that “the organization and work of the Court, order the proceedings of the constitutional procedure and enforcement of decisions and conclusions of this law sets (p. 1). Inner work of the Court and the rules of procedure of consideration of cases establishes under this Law by the Rules of the Constitutional Court of Ukraine (p. 2). ” But in fact, in practice it will be difficult to distinguish between “procedure” that should be regulated by legislation, and the “rules of procedure” which constitute a sphere of influence of Rules, because these concepts are very similar in content almost synonymous.

These rules historically borrowed from Anglo-Saxon justice, where the practice of the so-called court orders (order) is quite common. However, please note that in the Anglo-Saxon model of constitutional and supreme courts with the constitutional competence, act as the ordinary courts of higher instance, treating mostly criminal, civil and administrative disputes, which is a constitutional aspect. Ukrainian Constitutional Court also “embedded” in the European model named after Hans Kelsen, under which it operates not as a court of a fact but the court of a law. Therefore traditionally its work was not to the necessity of using “means of action” (order the arrest of the controversial aircraft, otherwise he will fly to Africa), one of which is writ, but a logical comparison of two legal texts – the text of Constitution and the text of the regulation, which challenges the constitutionality of an applicant filing a constitutional complaint.

It is not clear is the fact whether the Constitutional Court issues orders given on its own initiative or the initiative of participants of the constitutional proceedings. Do not forget that something similar provision contained in the first edition of the Law on the Constitutional Court of Russia in 1991 but how convincingly proven events in 1993 provided the Court to suspend the contested act and even open a proceeding on its own initiative brought the country to the brink of civil war and contributed to its intervention in the political process, because of the fact that the use of such measures by the Court on its own initiative openly shows its position in the case, with long before the adoption of the final decision. Allow the same in Ukraine is useless.

3. From our point of view, Art. 92 of the bill, which regulates the status of legal positions the Constitutional Court, is to supplement the provision that if the Constitutional Court in formulating their own legal opinions referred to the international law, which is a recommendation for Ukraine in nature, then the necessity to follow the specified position can not national lawyers be rejected. A similar rule in the established practice of the German Federal Constitutional Court, whose decisions are considered to be standard throughout Europe.

4. Art. 59 should be possible for a judge-rapporteur refuse to write the final draft decision for approval of the discussion at a closed session of the plenary, in the case when his vote was in the minority.

5. Some requirements contained in Art. 64, according to which the main form of proceedings before the Court is a written procedure. In the present case, the Court considers the written procedure is main, certain issues can be considered in order of oral proceedings. Indeed, at first glance, in most constitutional courts in Europe it is written in the mode of hearings. For example, experts estimated that the Federal Constitutional Court of Germany in the mode of oral hearings considering the less than 1% of cases. However, it should consider at least two things. First, for almost five years (2010-2015), The Constitutional Court has worked exclusively in the mode of written hearings, not helped increase the credibility objectively limited the access of the public and journalists to courtrooms, made it impossible to parties to bring its position to the judges. And secondly, if the drafters repeatedly demonstrated their propensity to Anglo-Saxon standards, in which case they should be completely consistent. After the US Supreme Court, the United Kingdom and other countries of “common law” do not know the written proceedings, as the most significant feature of the judiciary in these countries is orality.

So in general, the bill leaves a contradictory impression: on the one hand, an attempt to create a flexible and three-dimensional model of constitutional justice oriented, global experience and adequate current legal realities, on the other – a document in certain moments characterized by inconsistent and fragmented as any other acts of Ukrainian legislation.