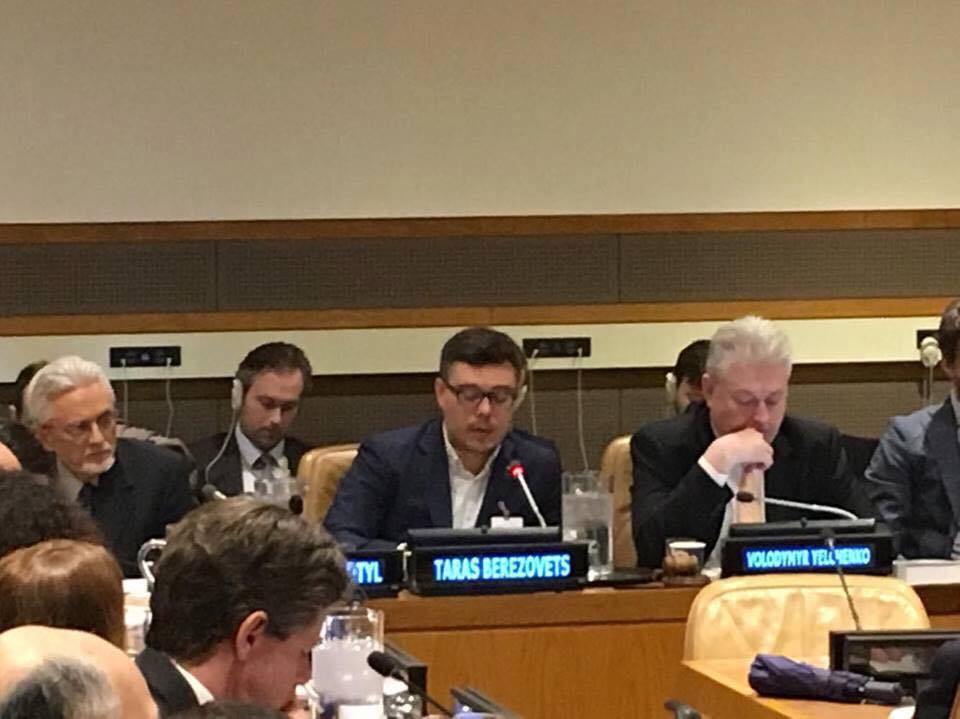 Taras Berezovets, cofounder of the Ukrainian Institute for the Future for UN Security Council

Today we are here in the UN Security Council to discuss the issue that literally concerns every human and every country on earth. Being 4600 miles away from my home country Ukraine may give you a feeling of an illusory safety from the hybrid war and its consequences. You and billions of other people can watch it 24 hours online in the cozy offices and still delude yourself about the truth.

And do believe me that the value of truth in the modern military conflicts with the changing hybrid nature cannot be underestimated. Today mankind is facing absolutely new unseen threats, whenever you like or not. These new wars, as Mary Kaldor, a British professor of the London School of Economics, once called them, give rise to the birth to a new hybrid world or more precisely hybrid world order. A hybrid war can be interpreted as a model of war, which tries to hide its military nature, as well as the participation of state in it.

This war when examined looks unique by many parameters as it combines far-fetched reasons from the warmonger, lies during the initial stage, massive national and overseas propaganda, terror, disinformation and economic pressure on the enemy and moral decay of the population of the aggressor country, reinforced by the permanent representation within UN Security Council. A country plotting an illegal wars, always exploits weakness of the international law. Moreover, not only it does this in bilateral negotiations it also exploits the weakness of the UN security council, where it abuses its right of veto as a permanent member. We saw examples of such an arrogant behaviour in 2008 when Georgia was without a reason attacked by Russian forces and Ukraine by Russian little green men in 2014. In both cases all claims have been dropped.

The hybrid war first of all targets the existing world order based on the rule of law. And the geostrategic goal of this operation is the return of a status of the superpower and to discard the world to the XX century realities with the rhetoric of a classic realpolitik with the zones of influence and the struggle of systems. To Russia and its President Vladimir Putin the fact of the illegal annexation of Ukrainian Crimea was a sort of a sacral act, as Russian leader named it himself. To Mr. Putin a so-called post-Yalta world, which was born in Livadia Palace near Yalta in Crimea in 1945 when American, British and Soviet leaders agreed to shape a post-WWII world, became a sort of idea fix.

No wonder that when this post-Yalta order collapsed in 1991 along with the Soviet system been dismantled worldwide, Russian elite was so frustrated that it started immediately to conspire a plot of changing the world order. Mr. Putin claimed it himself in 2010 that the disintegration of the Soviet system was a personal tragedy to him and I quote him here “Who does not regret the collapse of the USSR, he has no heart”.

From this prospective events in Ukraine in 2013-2014 when corrupted regime of Victor Yanukovych was ousted were a personal trauma to Vladimir Putin. In his view, what started in Crimea during 1945 Yalta conference, was terminated by Crimea annexation nearly 70 years after. In a recent article at the Guardian Ukraine foreign minister Pavlo Klimkin correctly pointed out that “reversing the breakup of the Soviet Union and restoring the Russian empire have now become an obsession for the Kremlin”.

He also focused on three main pillars to understand what motivates Russia.

The first thing is Russkiy mir – “Russian world”: a philosophy that dates back to the Soviet time and central to it is the belief that Ukraine is part of Russia. The usage of hybrid warfare let Moscow not only illegally to annex Crimea and invade Donbas with its proxies but it also set eyes on other former Soviet republics and satellites, seeking to destabilize and divide the Transatlantic alliance.

Russian World as a starting concept for Russian intervention can be even perceived quite naturally and somehow attractive for groups of population of former Soviet republics and some Eastern European countries.

Second, hybrid warfare cleverly combines military aggression with a sophisticated propaganda, the manipulation with the elections and even attempts of coup-d’état. Two last vivid examples of this we saw in France, USA and Montenegro.

In February France warned Russia against interference in the elections and pointed the finger of blame at Moscow. “It’s enough to see which candidates, Marine Le Pen or Francois Fillon, Russia expresses preference for in the French electoral campaign”, foreign minister Jean-Marc Ayrault said last month. “Whereas Emmanuel Macron, who is pro-Europe, is being targeted by cyberattacks,” he added. “This form of interference in French democratic life is unacceptable and I denounce it”. The allegations come over Russia’s alleged interference in the US elections. US law enforcement agencies had already accused Russian intelligence of hacking emails of US politicians.

In Montenegro Russia allegedly plotted to assassinate the prime minister Milo Djukanovic and topple its government in October 2016. An election day coup plot to attack Montenegro’s parliament and kill the pro-Western leader was directed by Russian intelligence officers with the support and blessing of Moscow, to sabotage the country’s plan to join NATO. Evidence collected by authorities in Podgorica show that “nationalist structures from Russia” were behind the plan to oust Djukanovic “but now we know that Russian state bodies were also involved,” Milivoje Katnic, the country’s special prosecutor, said on 20 February 2017. As usual, Kremlin has strongly denied any involvement. Kremlin spokesman Dmitry Peskov said Putin’s administration rejects “irresponsible” accusations by the prosecutor.

With annual budget for domestic and international propaganda reaching $1.5 billion, Kremlin easily spends only for the world-wide TV station Russia Today about $220 million per year and $120 for the RIA Novosti.

Brand new information war tools serving Russian geopolitical interests also include the sophisticated troll factories near St Petersburg. Third, says Pavlo Klimkin, Russia cannot be trusted as Kremlin respects only power and should only be negotiated with from a position of strength and international solidarity.

It also should be clear that a new hybrid world order, or as former National Security Secretary of Ukraine Volodymyr Horbulin named it a new hybrid world disorder, that we see is being built before our very eyes is not a transit state but is a new reality. A reality where Russia or other countries promoting hybrid warfare, cannot be judged from a normal point of view. Hybrid war cannot be seen as a U-turn towards the Cold war as it replaced it along with the new conflicts. At the same time the hybrid warfare is not static and it has developed significantly during last three years. The most important thing worth mentioning is that the new forms of conflict unlike it used to be in the bipolar world have unclear, chaotic and multiple character. Hybrid war also means that international law also becomes hybrid in a sense.

In this report, General Gerasimov gave detailed analysis to the western military experience in the Middle East and Europe, particularly addressing the so called “colour revolutions” in the former Soviet countries. He stated that in many cases non-military methods were much more efficient than the traditional military ones, and moved the focus of “new wars” toward the massive use of humanitarian, informational and economic instruments, oriented to activation of protest potential amongst people of the countries – targets of the hybrid war.

Particularly, the “new wars” are based on dilution of the frames of traditional warfare of the First and Second World wars, which the world faced in the 20th century. The low intensity conflicts, according to M.Kaldor, are characterized by dilution of the line between an organized crime and a large-scale violation of human rights. In contrast to such high intensity wars as Vietnam War (1959-1975) with participation of the USA or Afghan War (1979-1989) with participation of the USSR, the “new wars” are notable of mixing the notions of public and private, civil and domestic political conflict.

In the low intensity conflicts, besides the regular army, three main types of irregular armed forces always take part. These are paramilitary units, usually controlled by one person (as an example, the Crimean “self-defense” of S.Aksionov), groups of contractors (Russian Kozaks in Crimea and Donbas) and local security forces who change the sides during conflict. Rebel separatist movements, according to the contemporary theory, often resemble social organizations with no vertical structure, that’s why they rather look like hybrid network but not like regular units.

Informational and diplomatic covert operations are particularly important elements of hybrid war. We may now follow the remake of so-called Brezhnev doctrine, according to which all the actions of the West on the former Soviet Union territory were subject to coordination with the Kremlin. Later, during the Bucharest NATO Summit in April of 2008, where with the support of Russia’s friends France and Germany, Ukraine was rejected to submit the NATO Membership Action Plan, Vladimir Putin, being the president, made well known remark to his colleague George Bush Jr.: “Ukraine is not even a country… If Ukraine goes to NATO, it will go without Crimea and the East and it will simply fall apart”.

Looking back on the events of almost 3 years ago when a villainous attack of the Russian terrorist forces and separatists happened, we can already come up with more considerate conclusions.

Direct evidences of the Russian special services and armed forces involvement become officially mentioned in resolutions of the UN and PACE, in official documents of the European Union, USA and other western countries, and also appeared in a yearly report of the International Criminal Court in The Hague which was published on November 14, 2016. The latter provoked Russian President Vladimir Putin to sign a decree on Russia’s withdrawal from the Rome Statute of the International Criminal Court. This was another important confirmation of the involvement of the Kremlin to direct aggression that was conducted in the southern and eastern regions of Ukraine.

In February 2014 I was personally in my homeland Crimea and saw with my own eyes the first sprouts of violence which were brought by Russian little green men and proxies. As a researcher of hybrid warfare and a witness I can finish my speech with one wonderful quote by an Irish political philosopher Edmund Burke «The only thing necessary for the triumph of evil is for good men to do nothing».

Taras Berezovets at the UN Security Council: “The Russian world” in the Kremlin’s understanding is the aggression and propaganda