» News » Taras Berezovets at the UN Security Council: “The Russian world” in the Kremlin’s understanding is the aggression and propaganda 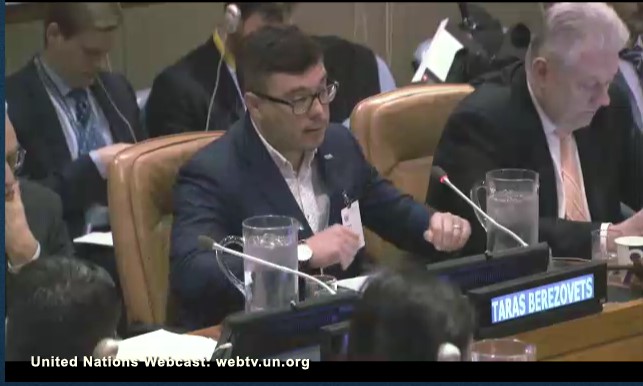 “The Russian world” in the Kremlin’s understanding stands for aggression and propaganda, – Taras Berezovets, a political scientist, co-founder of the “Ukrainian Institute for the Future” said on March 31 at a meeting of the UN Security Council dedicated to hybrid threats. According to Berezovets, on the eve of the meeting the Russian delegation tried to disrupt the event.

“They tried to convince the British who are presiding the Security Council to cancel tomorrow’s meeting; and now they are trying to disrupt the live broadcast, which will start at 5:00 p.m. Kyiv time on the UN website’, – Taras Berezovets wrote in Facebook. Later, he noted that the meeting began with a large number of participants. “The full hall testifies to the awareness of the scale of the problem for international security”, – the Ukrainian political scientist said.