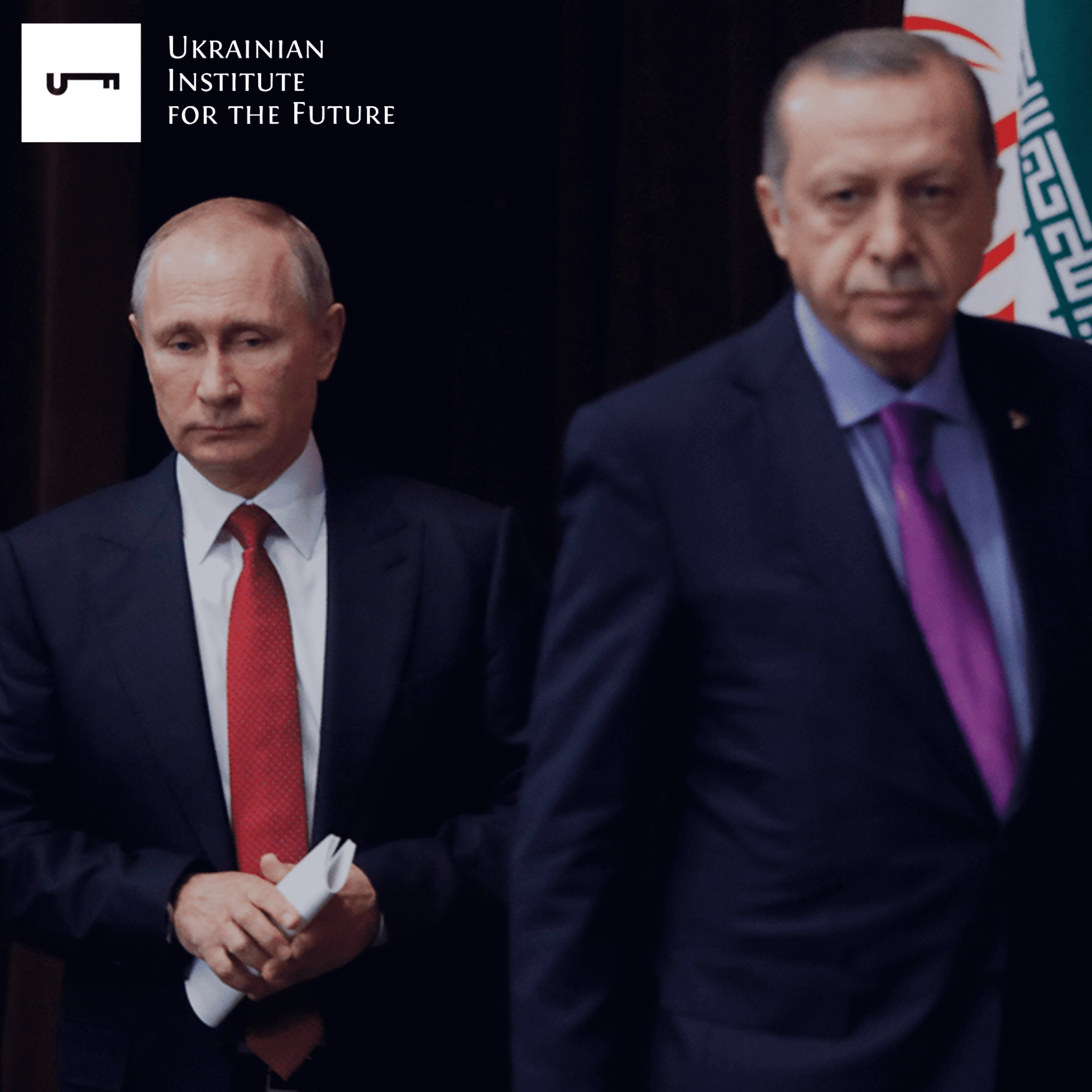 The current situation at the Zaporizhzhianuclear power plant is growing critical not only because of the Russian shelling. Above everything, Russia considers the ZNPP a key factor in ending the war against Ukraine.

Recently, the Russian Federation has basically failed to achieve any success at the frontline, and despite the minor progress in the Donbas, the Russian army has largely exhausted its offensive capabilities.

According to the President of Energoatom Petro Kotin, “Rosatom personnel handed over to the station a special program to reconnect the Zaporizhzhya NPP to the Crimea. The prerequisite for this program is severe damage to the ZNPP communication lines with the Ukrainian energy system. It is what we have seen in the last three days. Within this period, three lines were damaged. Unfortunately, currently, ZNPP outputs power into only one line”.

Vladimir Rogov, a representative of the occupation administration of the Zaporizhzhia region, said, “The Zaporizhzhya NPP plant might be mothballed because of the constant shelling”. According to him, “The ZNPP did not get critical damage as a result of the shelling and the reactors operation was not disrupted, but the load on the nuclear power plant was cut to a minimum.”

Recently someone posted a photo of the felled power transmission towers in the Kherson region and, apparently, this development does not allow the Russians to complete the tasks of “reorienting” the ZNPP to the Dzhankoy substation in Crimea in a short space of time.

Zaporizhzhya NPP and the Kakhovska HPP make up 27% of Ukraine’s electrical power. The loss of these capacities would be among the most dangerous economic blows to Ukraine. However, the main issue is that the Russians want to play the energy card ahead the heating season. And the marker of whether they want to go for it or not is the transportation/non-transportation of gas via our transmission system. If gas transportation terminated, the Russians may begin to shell core Ukrainian electrical substations so that the country will find itself lacking electricity — and hence heat — in the winter.

The Zaporizhia NPP and its reorientation to Crimea is just one of the stages of a wider energy war that the Russian Federation can launch against Ukraine.

It is also worth noticing the Russian Federation call to hold a UN Security Council meeting regarding the situation at the ZNPP. Apparently, seeking such a meeting, the Russians had two tasks: first, they tried to steal the information initiative, and second, they wanted to buy time for their attempt to reorient the ZNPP to Crimea as quickly as possible. Their plan looks like this: they inflame the situation, raise the issue of the IAEA delegation’s visit to the ZNPP — but do not allow it to happen until they manage to reorient the station.

Currently, the situation at the ZNPP is critical due to the presence of Russian troops on its site, including the heavy weapons in the station engine room. Therefore, the nuclear threat is higher than ever.

It is also worth paying attention to the person responsible for what is happening at the ZNPP. His name is Sergei Kiriyenko, he is the deputy head of the presidential administration of the Russian Federation (before moving to Putin’s office, he was the head of Rosatom and still retains control over this company).

So, the key task for the Russians, who have yet to succeed at the front, is to try to cut off electricity in Ukraine during the heating season. And the termination of gas transmission using Ukraine pipelines will be a key marker of whether the Russians are ready to implement this scenario.

The Cabinets of Belarus Opposition

Last week, the New Belarus conference, organized by Svetlana Tikhanovskaya’s entourage, took place in Vilnius, Lithuania. At a conference, participants announced the reformatting of their work and presented a united transitional Cabinet. It included representatives of the Tikhanovskaya Office, the People’s Anti-Crisis Administration (Warsaw, Pavel Latushka), BYPOL, the former commander of the 38th Brest Separate Guards Air Assault Brigade Valeriy Sakhashchik. The conference was widely covered in the Ukrainian press. This association has arguably gotten the most media attention, but it is far from being the only one. On August 11, representatives of another center of “unification” of the Belarusian opposition presented their vision of a way out of the impasse and their understanding of resource aggregation.

In 2022, the new Belarusian opposition found itself in a deep crisis. Sociological studies have shown the segmentation of the Belarusian society and, most importantly, the segmentation of the information space. Two key groups, pro-Lukashenka and his active opponents, both gathered, according to various sources, from 20 to 25% of the population’s support. Apart from these two, the poll showed several more groups (united according to political sentiments and values) that did not perceive either conditional Tikhanovskaya or conditional Lukashenka as a political reference point. The situation was aggravated by split-offs within the opposition camp (at least 7-8 groups operating independently from each other) and a lack of media resources to reach out to groups outside the “core of the protest support”. The majority of the opposition groups have decision-making centers outside Belarus, and every month they kept losing the ability to influence or even communicate with the people who stayed in the country.

On the other hand, Lukashenka’s entourage, having mobilized their electoral base, also could not reach out to different social groups. As a result, it had no chance (without a change in policy approaches) to expand its support core.

There is a parity of forces, with both extremes not enjoying the support of the majority of the population and having no means (media, ideological) to reach the majority of the country’s population. The situation in the opposition worsened by the fact that their active supporters had left the country. On top of it, the internal split-off further plummeted the situation: 25% of support was “shared” between many opposition groups, and no one among them could claim they got at least 10-15% support.

At the same time, neither side of the confrontation had plans that could radically change the situation in their favor:

• Lukashenka’s entourage counted on “planting” some “positive expectations” or “expectations of change” among the population regarding a new constitution after the referendum. However, the war in Ukraine has led to the opposite effect, since the majority of the population (in all political groups) has a negative attitude toward the very idea of aggression against Ukraine.

• Amid the crisis, the new Belarusian opposition tried to play the anti-war sentiment card but a long history of high-profile statements without results did not allow any group to strengthen significantly. On the other hand, organized groups of Belarusian volunteers fighting alongside Ukrainians have emerged to become a new actor in Belarusian politics.

This situation caused many conflicts and accusations among various Belarusian democratic groups, in particular, regarding funding, support for volunteer fighters, and foreign policy communication.

One of the manifestations of this situation was the Belarusian Democratic Forum, which brought together most opposition organizations while boycotting the Office of Svetlana Tikhanovskaya. At the second forum in Berlin, they announced an ongoing creation of a common decision-making center.

It was after the second Berlin forum that Tikhanovskaya Office urgently organized their own conference (called both a forum and a congress) and tried to “lead” the unification. Some Berlin forum participants came to Vilnius with their vision of further developments. Their standpoint was simple: the unification of groups on equal terms with a past policy mandatory revision (including the audit of the resource allocation mechanism). The initial position of the Tikhanouskaya Office was a unification due to the expansion of their own group, with the Office maintaining a leading role.

The created Cabinet is a compromise between the two concepts and is now a temporary solution. The key idea is in a transition to work according to the selected areas, with the introduction of an evaluation and responsibility mechanism applied to the cabinet members. They also agreed to renew the work of the Coordinating Council created in 2020 and to transform it into a representative body, which can (or should) approve some strategic decisions. However, since the compromise was reached, apparently, in a matter of minutes before the announcement of the Cabinet members, even the participants did not have a comprehensive vision of how it would work.

The groups around Tsepkalo, Bolkuntsa, and Karach didn’t participate in this association. They continued working within the framework set by the Berlin Forum and, as soon as August 11, presented their concept: the creation of an analog of the parliament with electoral procedures.

Today, the Belarusian opposition is trying to avoid its complete collapse by taking steps to create decision-making centers. However, the depth of the crisis and the accumulated conflicts do not allow us to talk about complete unification. In the near future, there will be an attempt to create at least 2 (in the short term 3-4) centers of unification, each claiming its dominance.

It is too early to say which of them will become (and whether it will become) the real core of the concentration of democratic forces. It depends on further steps and moving away from the policy of “statements of support” to specific concerted actions, albeit on a smaller scale.

More about the situation in Belarus in the Ukrainian Institute for the Future’s report What we should do with Belarus: the logic of influencing the country.