» Аналітичні матеріали, Новини » Partners in death: which global giants can stop the suffering of the civilian population in Ukraine 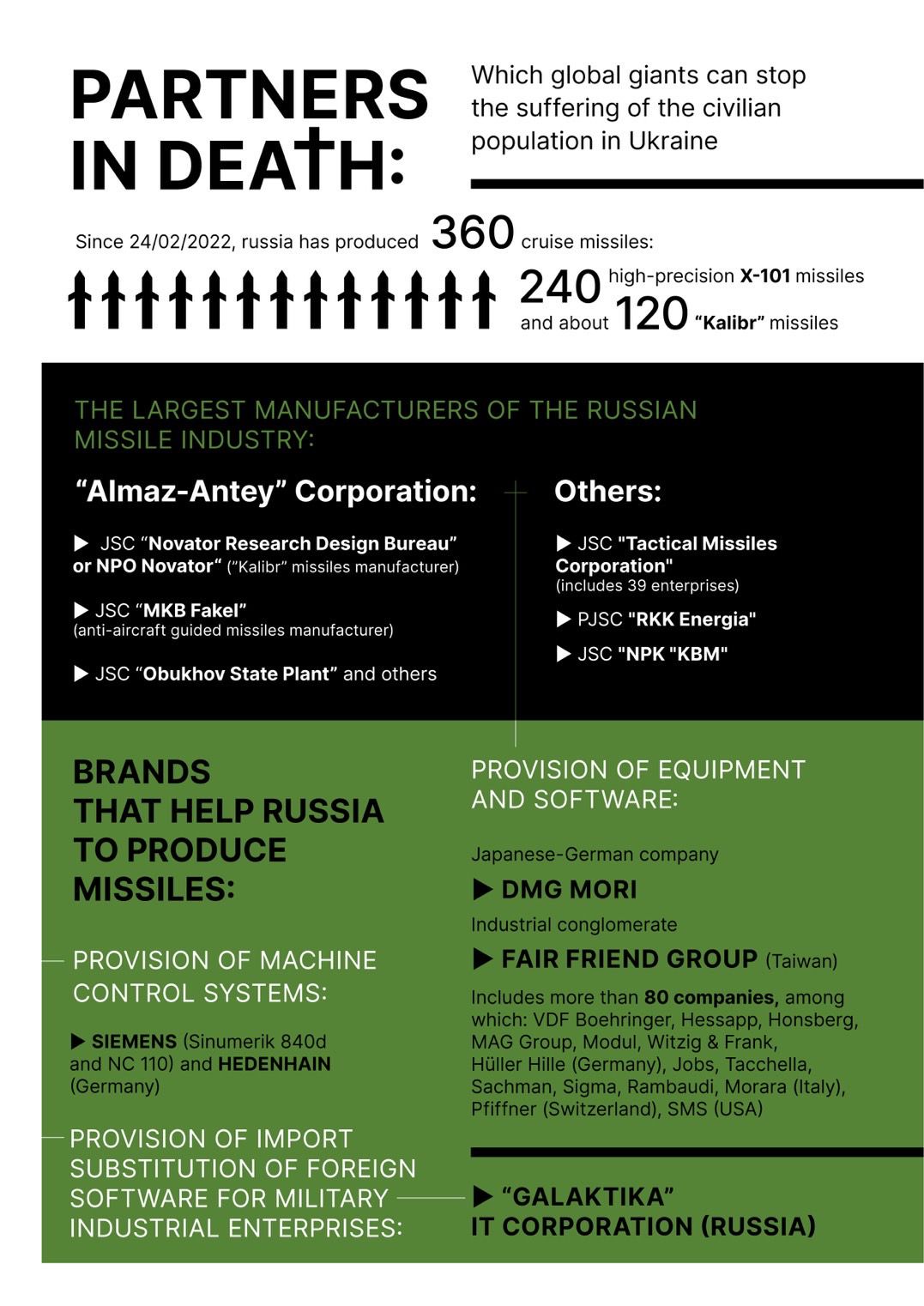 We continue a series of publications dedicated to foreign companies that, despite the sanctions, do not stop cooperation with Russia.

And now about the most daring partnership – in the field of rocketry. Every day, millions of Ukrainians hear air raid sirens and pray that this time there will be no missile strikes. As long as Russia has missiles, as long as their production continues, these people, their children and older people will never be safe. The world-famous companies that actually have influence and can end Ukraine’s suffering, but are not doing so – who are they, and how can these “death providers” be forced to stop profiting from human lives?

Western sanctions against the Russian defense industry have complicated but not stopped Russia’s missile production. According to the intelligence, since the beginning of the large-scale invasion, Russia has been able to produce 360 cruise missiles – 240 high-precision X-101 missiles and about 120 “Kalibr” missiles. This means that only during this period, military missile units received missiles for at least three or four large-scale attacks against Ukraine. Ukrainians are already well aware of the price of these attacks: de-energized regions and huge parts of our country, communication disruptions and problems with cashless payments, transportation problems, lack of heating, water supply, etc.

By its nature, rocketry is branched and multifaceted. The structure of production involves both industries that have a high level of development in Russia and those where the Russian military-industrial complex is forced to use imported technologies and components. The most crucial for the Russian rocketry are production methods used for almost every part and component – high-precision equipment (CNC machines, turning and processing machines, milling machines, rotary machines, etc.), which require support of special software from the manufacturer and constant service with original spare parts.

But there is no doubt that if the issue of selling new equipment may indeed be complicated after the official announcements of brands regarding their withdrawal from Russia, the issue of software supply is crucial and the most important – it is really difficult to control, which allows circumventing sanctions and continue to support the production of Mordor’s military-industrial complex.

Today, several world giants joined the missile attacks on Ukraine. Back in July, the media space covered a scandal about software updates for DMG MORI equipment at the Obukhov plant of the Russian concern Almaz-Antey, which produces S-300 and S-400 air defense systems. Many resources published analytics and stories about the temporary shutdown of software supplies for high-tech CNC machines DMG MORI, which led to the release of a batch of defective air defense systems that could not withstand the HIMARS systems provided to Ukraine. These publications offered not only proof that DMG MORI software continues to work “for the benefit” of Russian missile production, but also gave impetus to the main conclusion – the official manufacturer of this technological and versatile equipment retains access and the ability to both update its software and restrict it, or completely disconnect the supply.

After the scandal, Obukhov plant hastily removed job postings from its official website, which clearly indicated the DMG MORI machines on which future employees should work, but as they say, “the Internet remembers everything” and duplicates it on many resources. Therefore, we can see not only the evidence of the continued operation of DMG MORI equipment at the enterprises of the Russian military-industrial complex (which would actually be impossible in case of disconnection from the software), but we also can identify other world manufacturers whose equipment works according to the same scheme: uninterrupted supply of software and systematic original service from the manufacturer is necessary.

In fact, to monitor compliance with sanction restrictions by Western corporations, it is enough to closely monitor the largest manufacturers of the Russian missile industry: Almaz-Antey Corporation, which includes Novator Research Design Bureau JSC (manufacturer of Kalibr missiles), Fakel MKB JSC (specialized enterprise for the development of anti-aircraft guided missiles), Obukhov State Plant JSC and others, Tactical Military Armament Corporation (includes 39 enterprises), RKK Energia PJSC, KBM NPK JSC (design, research and production center in the field of military equipment). None of these enterprises is able to work in full compliance under the sanctions regime. We found not only enterprises that work at full capacity, there are also job openings for working specialties at these enterprises to work with the facilities of the above-mentioned brands.

The fact that the companies of the Fair Friend Group Conglomerate continued to supply their products after 24.02.2022, in conditions when Taiwan joined the sanctions against Russia the day after the outbreak of the war, is evidenced by a number of open documents on tenders for Hessapp, Jobs, MAG Group, Modul, Sigma, SMS, DMC, Tacchella products for Russian military-industrial enterprises. That is, Fair Friend Group, which includes German, Italian, Swiss and American companies, does not actually leave Russia, does not give an official position on the war against Ukraine and continues to provide the production of missiles and other weapons to the terrorist state.

For example, VDF Boehringer (Germany), its CNC turning centers are currently represented in Russia through Alliance LLC, which is a supplier of equipment to military-industrial enterprises and pro-government agencies, including tender procedures. Alliance LLC directly cooperates with Sberbank Leasing.

In addition, it is worth noting that the vital activity of the production cycle is supported by uninterrupted use of the program control systems Sinumerik 840d and NC 110 of Siemens and the Hedenhain system, which continues to this day, according to the vacancies of the Russian military-industrial complex and the emphasis on this during this summer in social media. This once again demonstrates the fact that it is not enough to declare a withdrawal from the Russian Federation and even stop selling equipment there. To supply software means to continue to provide terrorists with the ability to produce deadly missiles and more.

At the same time, in order to implement the strategy of import substitution of foreign software, the enterprises of the military-industrial complex are in strategic cooperation with the Russian IT Corporation “Galaktika”, whose software and methodological solutions should replace the control systems in the cycle of weapons production. Foreign companies that ensure the vital activity of “Galaktika” and sanctions against it are the subject of a separate study of our IT block.

So, there is no doubt that if the issue of selling new equipment may indeed be complicated after these brands’ official announcements of withdrawal from Russia, the issue of software supply is crucial and the most important – it is really difficult to control, which allows circumventing sanctions and continue to support the production capacity of the Mordor’s military-industrial complex.

As you can see, the list of foreign companies, on which it depends whether the civilians of Ukraine will live in peace or expect deadly missile strikes from Russia every single second, is known and clear. And today it is obvious that the question to the world producers should be put rigidly and categorically: What have you done to ensure that your equipment stops working for the production of weapons by a terrorist state?

This publication was prepared by the Information Agency “Underdog” The Unlawyers” exclusively for the project “Don’t Fund Russian Army”, https://dont-fund-russian.army.