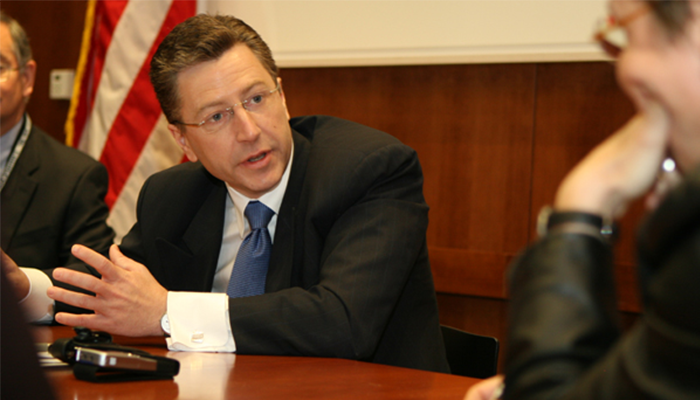 KIEV, Ukraine — Secretary of State Rex Tillerson said Sunday that Russia must make the first moves to rein in separatists and remove its weaponry from eastern Ukraine. He also vowed that sanctions would remain in place until Moscow reverses its actions and respects the border between the two countries.

After an hour-long meeting with Ukrainian President Petro Poroshenko, Tillerson told reporters that relations between Moscow and Washington will not improve until Ukraine gets back full control of its territory from separatists he characterized as Russia’s “proxies” in two breakaway provinces.

“I have been very clear in my discussions with Russian leadership, on more than one occasion, that it is necessary for Russia to take the first steps to de-escalate the situation in the eastern part of Ukraine,” he said in a joint news conference with Poroshenko in which he called for Russia to use its influence on the separatists to enforce a cease-fire and allow international observers to do their work safely

Poroshenko said that during their talks, Tillerson assured him that the United States is also committed to the return of Crimea, which Russia annexed in 2014after a hasty referendum that took place after Russian troops had seized the peninsula.

Tillerson did not mention the word Crimea but suggested that Russia’s annexation of the peninsula remains a major sticking point, saying that “the U.S. and E.U. sanctions on Russia will remain in place until Moscow reverses the actions that triggered these particular sanctions.”

Secretary of State Rex Tillerson is asserting himself in a more conventional manner for the top U.S. diplomat by throwing himself into an intensive round of diplomatic forays abroad. (Cliff Owen/AP)

Tillerson was in Kiev with his new special envoy, Kurt Volker, as part of a U.S. push to resuscitate stalled negotiations over ending three years of war.

During his visit of barely three hours, Tillerson also squeezed in a meeting with young reformers who are pushing for the government to be more responsible and attractive to foreign investment. Then he left for Turkey to talk with President Recep Tayyip Erdogan about the fast-moving offensive against the Islamic State militant group in Syria, before heading to the Persian Gulf for four days of shuttle diplomacy to mediate a dispute between Qatar and its neighbors.

The multipronged trip represents something of a pivot for the former Exxon Mobil chief executive, who came to the State Department job with no diplomatic experience. After months of complaints that the department is being sidelined, Tillerson is asserting himself in a more conventional manner for the top U.S. diplomat by throwing himself into an intensive round of diplomatic forays abroad.

He came to Ukraine at a time when the Trump administration is trying simultaneously to improve relations with Russian President Vladi­mir Putin’s government and break the logjam in peacemaking efforts in a conflict that has brought punishing sanctions for Russia.

Many Ukrainians are encouraged by the greater U.S. involvement and the appointment of Volker, a seasoned diplomat who has backed sending lethal arms to Kiev to defend itself.

“It is welcomed, since the guy is a hawk,” said Konstantin Batozsky, a political analyst in Kiev.

The Ukrainian government has been fighting separatists since 2014, when Russia annexed Crimea and began providing munitions and sending troops to fight alongside Ukrainian rebels in the breakaway provinces of Donetsk and Luhansk, known collectively as Donbas. In 2015, Germany and France helped broker agreements that provide a road map to peace that requires Russia to withdraw its support for the separatists and Ukraine to give Donbas a measure of autonomy.

But the road map enshrined in the Minsk accords, after the city in Belarus where they were negotiated, has faltered over each side’s reluctance to compromise. The Ukrainians insist they will amend the constitution to provide the desired autonomy only after Russia backs off. The Russians demand that political guarantees come first.

Volker’s appointment mollifies Ukrainians who have been concerned that President Trump might make a deal with the Russians unfavorable to Ukraine.

“Kurt has been very strong on Russia,” said Taras Berezovets, a political analyst in Kiev who talked with Volker during a visit to Washington last month. “Germany and France have played a crucial role. But it is understood that if the United States gets involved, the chances of getting a peace agreement will be much higher.”

The conflict in eastern Ukraine has killed more than 10,000 people. But in the capital, Kiev, there are few signs of a nation at war, apart from the occasional military recruiting poster and young men on the streets in uniform. Sidewalk cafes are thronged, and fountains in the heart of the city, where protesters encamped for months in 2013 to oust the Russia-friendly government, now bubble to music at night.

However, progress on reforms that can restore confidence in the government is slow. Some improvements are notable, such as a U.S.-funded program to train, equip and adequately pay police patrol officers so they don’t take bribes from motorists. But corruption is still so endemic that people routinely make small payoffs to university professors to pass an exam, or to doctors to get appointments.

Iryna Gerashchenko, the deputy speaker of parliament, noted that 120 Ukrainian soldiers and 70 civilians have been killed in the war this year. She also cited 132 “hostages,” the Ukrainian term for prisoners held by separatists.

What’s most important from where the world meets Washington

By keeping sanctions against Russia in place and possibly adding new ones, as many in Congress want, she said, the United States can help restore Ukrainian sovereignty in the east and in Crimea.

“Putin wants to restore the empire and determine his borders,” said Gerashchenko, who was assigned by Poroshenko to find a peaceful settlement. “It’s Putin’s calculus that Donbas and Crimea will be forgotten because the world is facing new threats. But for the United States, principles are important.”

Others worry that the conditions that contributed to the failure of the Minsk agreements have not changed.

“It looks like a dead end,” said Mikhail Pogrebinsky, who heads the Center on Political Research and Conflict Studies, citing divergent expectations among Ukrainians. “In the west of the country, the majority of the population wants a military victory over Russia with the help of the United States. In eastern Ukraine, even in territory controlled by Kiev, the majority want negotiations with the separatists leading to autonomy. People are tired of war, especially in the east and south. But the government of Ukraine is not tired.”