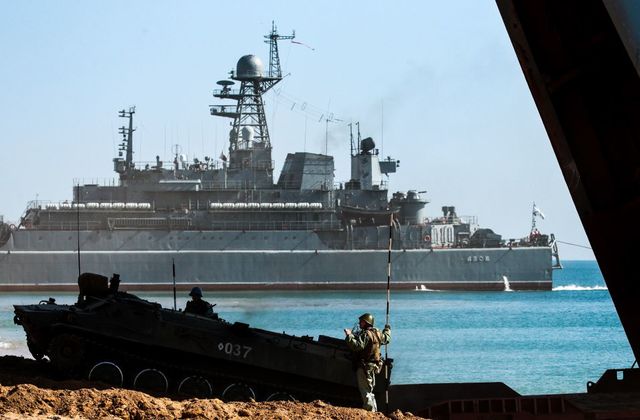 Ukraine is in trouble. It has been in trouble for four years but the government has been playing a game of “Let’s pretend it will go away.” Now that game is becoming serious. The war in the Donbas shows no sign of lessening. In fact, in the last weeks, the pressure has been turned on again. No matter what nice words the Joint Headquarters uses about being in control, being attacked 45 times or more in one day with soldiers dying and seriously injured is the very opposite of control.

The fact is that in the ground war Russia has the initiative and attacks where and when it likes. But it is at sea that the pressure is now telling. Russia has taken over the Sea of Azov unopposed and is now moving her operations more seriously into the Black Sea. The aim is to totally disrupt the trade sea lines to Ukraine. She has half managed it already with Mariupol dying. Today we can do nothing at sea, as the neglect of the navy is now clear to the world and Russia knows it – and almost certainly planned it.

Now is not the time to judge who is at fault for allowing this act. Punishment and resignations must come later. This is the end of a destructive process of “intentional neglect” against the navy that has been in train for at least 10 years. The government must accept that their defense policy has failed, is not working now, and will not work in the future. It has had too narrow a focus and relied too seriously upon people who were not capable of dealing with the enormity of the task. When a country is at war, accepting that something has failed is not a crime. Doing nothing to remedy the failure is.

So what to do? The harsh reality is that today Russia has the upper hand and the initiative. The Minsk process has brought time but little else. Casualties mount relentlessly. The reliance upon the European Union in the shape of Germany and France may have also brought some time, but it also brought dangerous national complacency.

The government foolishly hoped and expected more from the foreign involvement. NATO membership remains a pipe dream and NATO is unlikely to ride in on a white charger to save the country. Now it is clear that precious time has been lost on fanciful dreams, public relations nonsense like saying the country is 90 percent ready for NATO, and shouting about reforms that are really just good administration and no more.

Both internal and external actions are needed urgently now to buy time to re-equip and re-arm the navy. The options are few and may likely fail. It is very likely that more concessions will have to be made to Russia. Externally the government has few if any good strategic options and needs to take as many actions as possible hoping something may have an effect:

• The first is the diplomatic approach. The government must energize all the ambassadors to persuade their host countries to lobby Russia hard to pull back. Serious political energy should be spent on those countries that are doing big business with Russia like India. Senior ministers should travel to make the point that this is serious. Official and open complaints to every organization that Russia is part must be sent to the UN, WTO, OSCE and the Black sea cooperative ventures. Russia must feel the diplomatic heat.

• The second act is to work directly with the United States and the EU to get them to increase sanctions and verbal pressure. The PR campaign for this must be widespread and brutal.

• The third is to lobby the U.S. and other naval countries for vessels and possibly weapons on a long repayment loan. This has to be the president and the prime minister as no lesser persons will be taken seriously. The priority should be fast boats capable to carry out , strike, MCM, and amphibious missions.

• Fourth must be a direct Presidential plea to NATO to keep the sea lanes to Odesa open by having standing NATO naval forces in the area at all times. This may need concessions in terms of granting long-term naval basing rights to the U.S. and others.

• Fifth must be to pull forward the project with the U.S. to get a recognized maritime picture.

• Sixth is to step up the legal war. Every shred of legal advantage from every forum must be exploited.

• The last and unpalatable option is to sue for a naval based “Minsk 3” to buy more time. This may mean turning the water back on for Crimea but this is a strong trump card and should only be played last.

Internally the government must now undo the naval neglect of years and put the country on a proper footing for a future naval war:

• First is to identify a clear strategy for naval development in the National Security and Defense Council of Ukraine and give this as an order to the Ministry of Defense and the staff to carry out. Both have proven incapable of strategic thought in this issue and need direct instructions.

• Second is to recall the Verkhovna Rada from holiday for an emergency debate. The country must hear that this matter is being taken seriously. A clear message has to be sent by the parliament to the Ukrainian people what steps lawmakers believe should be taken concerning the 2003 Sea of Azov bilateral agreement with Russia and also what legal and other steps should be taken to regain control over Ukrainian territorial waters according to the UN Convention of the Law of the Sea. Nothing less than this is acceptable in a democracy. This will also put Russia on a warning that the game is changing.

• Third, the government must explain clearly to the Ukrainian people the value of maritime trade and the sea shelf to the gross domestic product of the country and why this matter is now critically serious.

• Fourth is to create a proper war management organization of the best brains in the country. This war needs to be conducted by serious thinking on a daily basis, not casual reaction every couple of weeks.

• Fifth is to set up a proper joint headquarters for the sea and coastline the same as for the Donbas. The Donbas joint headquarters cannot manage both tasks. In an escalation of either crisis, it would be overwhelmed and both fronts would fail. Forces should be allocated for this coastal headquarters in anticipation of a developing conflict. These should include forces from all three services and the Ukrainian Special Operations Forces (SOF). A serious commander must be chosen by a hard considered judgment of politicians. This is a new game and needs new harder thinking. The commander must produce options for what he would do to solve the problem if Russia will not desist. Innovative ideas using air, SOF and navy seals must be sought.

• Sixth is to squeeze the national budget hard and find money for all things naval. Every possible vessel in the country that has the capacity to be used for the navy must be pressed into service. The defense industry and the naval shipyards must be tasked to arm them with whatever is practical and possible. The key today is numbers, not size or quality. Russia must be faced with a totally new challenge.

• Seventh is to review wider plans and contingencies of what to do against Russia if the pressure keeps going or gets even worse. Loss of more national treasure must not go unpunished.

• Last but not least, the two coastguard vessels in the U.S. must be brought to Ukraine immediately. Crews should fly out to bring them home in days.

In conclusion, the country has been brought to a crisis by a high-quality stratagem delivered by Russia. But it was an action that was both foreseen by the navy and by experts. Their words were ignored by the staff and by Government. Russia shows no sign that she will take any notice of anything less than NATO vessels standing firmly in her way day and night. She may even ignore the real threat of force delivered by Ukraine.

To get NATO support will take diplomacy within the corridors of NATO headquarters and in the capital cities of all NATO countries and not the PR nonsense spouted so far. Even this may not be enough and Ukraine may now have to defend her sea territory. Time is not on Ukraine’s side to rebuild the capacity to defend at sea. The real action is now needed.