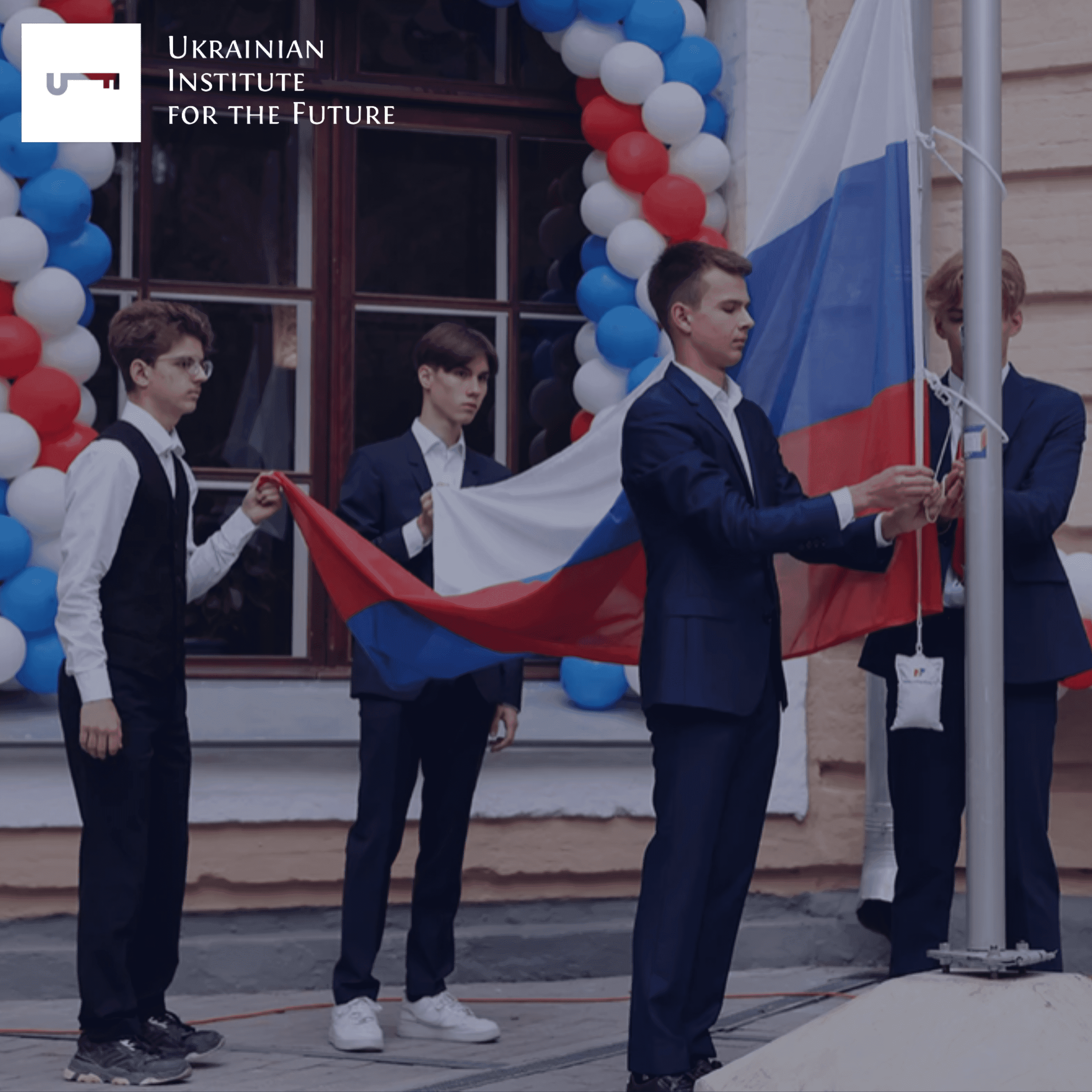 1. The topic of “referendums” in the occupied territories of Ukraine is an additional mechanism of foreign political blackmail conducted by Russia in an attempt to reach a “ceasefire” acceptable to the Kremlin. For Ukraine, such a scenario is one of the most dangerous in the upcoming months. As a result, the main goal is to oppose Kremlin’s foreign policy efforts and its lobbyists in the EU and the USA.

2. Since the beginning of the year, there have been quite a few deaths in the high-level rank of managers of energy sector companies in Russia. Russian energy and oil companies expect severe losses after the full launch of sanctions, embargoes, and other restrictive measures. It is quite likely that the top management is dissatisfied with the energy sector. Therefore, the Kremlin needs to prevent the appearance of dissidents among the top management in light of the impending crisis in the Russian oil industry.

3. Russian fifth-graders will be lectured about the invasion of Ukraine. The Kremlin understands that propaganda is not effective enough among the youth, so it will beginto introduce “political classes” in schools. According to the “Conversations about Important” extracurricular methods published this week, stories about the invasion of Ukraine will be taught since the fifth grade. All this should contribute to consolidating children and teenagers around Putin and his policies. However, today there is no reason to believe that such measures, copied from the practice of Soviet times, will have the expected effect, especially among older youth.

“Referendums” as a bargaining chip in ceasefire talks

The issue of “referendums” in the occupied parts of the Zaporizhia and Kherson regions of Ukraine was once again raised in the Russian Federation. The specific date is not named yet, but it has been reported that the “election commissions” have started their work, and there are possible dates in September 2022.

This is not the first time that the topic of “referendums on joining Russia” has been brought up. The previous dates have been postponed several times. But the waves of such messages have one common feature — joining the Russian Federation due to the “will of citizens” is mentioned in the Kremlin during periods of diplomatic consultations (such as, for example, regarding the grain agreement) or in light of statements by politicians about the expediency of a meeting between Putin and Zelensky, the result of which could be a ceasefire agreement.

In the period from August 26th to 30th, 2022, several Russian resources mentioned the”preparation for the referendum”:

• 26.08 RIA “Novosti” posted news about the active work of the “election commission” in the Zaporizhzhia region.

• On 28.08, RBC quoted Sergey Kirienko, who stated that “the majority of residents of Zaporizhzhia and Kherson regions are in favor of joining the Russian Federation.”

• On 30.08, Radio “Sputnik” presented a report titled “Kherson will never return to the control of Kyiv”, which relied on the statements of occupational administration’srepresentatives.

• On 31.08, the “mayor” (head of the occupational administration) of Berdyansk, Saulenko, announced that the referendum would be held quickly, however, stressing that he could not “name a specific date.” TASS quoted his words.

Last time, the topic of “referendums” was raised in light of Erdogan’s meetings with Putin and Zelensky. So, for example, on August 8th, Peskov stated that the negotiation process is still on hold and that “homework” needs to be done, while at the same time, he mentionedthat “local residents, not Russia, are preparing the referendums.”

The Russian Federation is preparing for the next stage of pressuring Ukraine to reach an agreement on a ceasefire. At the same time, Russia believes it is up to European politicians to “offer” Kyiv to sit at the negotiating table. It uses such tactics of introducing its theses for blackmail in several directions:

• The threat of a food shortage in 2023 due to drought in several regions (Europe, North Africa, and some Central Asian countries. In light of this, the Russian Federation (and its partners in the EU) will discuss the need for a ceasefire to prevent food and fertilizer shortages.

• Energy crisis in Europe and record hydrocarbons (primarily natural gas) prices. The Russian Federation supports the stress in the market, hinting at the possibility of supplying raw materials and solving the issue in the event of the lifting of sanctions or weakening of support for Ukraine (as well as forcing the Ukrainian leadership to “compromise” with Moscow);

• Nuclear blackmail. Russia is deliberately pedaling the topic of the ZNPP, creating the appearance of a crisis and the threat of a human-made disaster. At the same time, Putin is playing out a scenario of a possible transfer of nuclear weapons to Lukashenko. That is, it threatens to destroy the system of agreements on the non-proliferation of nuclear weapons. Both of these are more likely to be simple blackmail. Still, some European politicians tend to believe in the reality of the threat and the possibility of its prevention through “compromises” with the Russian Federation. The main one of which may be concessions from Ukraine.

It is Russia’s idea to enter into any agreements that reduce attention to the war in Ukraine and give reasons for several EU states to start restoring the usual level of cooperation with the Russian Federation. At this stage, an acceptable format for the Kremlin is a “truce” or a “ceasefire” agreement. This does not provide a substantive solution to the problem (which Russia is entirely satisfied with). Still, it creates an illusion of reaching a diplomatic settlement for some European countries.

The contours of the crisis in the perception of European (and a number of American) politicians are changing — a frozen conflict is emerging instead of war. This fundamentally changes Ukraine’s support format in the direction of a sharp decrease in the amount of military aid. After all, in the conditions of an active war, it seems logical to supply weapons, to strengthen the defense capabilities of your partner. But in the case of a “frozen conflict”,other principles apply to the EU states: not to supply weapons to the opposing parties (as itcan bring the conflict into an active phase).

The second aspect beneficial to the Kremlin is unfreezing part of the cooperation programs with the EU countries. Sanctions were imposed as a reaction to invasion and hostilities. If there are no hostilities, the Russian Federation can try to lobby for the cancellation or suspension of some restrictions. The latter (termination option) entirely fits into the logic of the EU’s behavior and has been repeatedly applied to various states over the past 10-12 years.

But the key bonus that the Kremlin is counting on is the processes in Ukraine itself. The absence of active hostilities leads to the abolition of martial law. For the restoration of the “pre-war” intensity of political processes, Ukraine will plunge into a deep crisis for the next4-5 months:

• “War-delayed” attacks by opponents on the president and the parliamentary majority will intensify;

• The suspension of hostilities will lead to growing discontent among the military service members and the majority of the population. The “defeat in war” thesis will appear in the public field, which would lead to the collapse of the ratings of the ruling group;

• The political crisis makes it impossible for Ukraine to quickly fulfill its obligations to its European partners (both political and economic), leading to a drop in financial and political support.

• All the mentioned above will be superimposed by the profound economic and demographic crisis caused by the war.

Thus, for Ukraine, one of the key ideas in its current foreign policy is to prevent any discussions about any options for “freezing” the war in its current state (read “in Kremlin’s terms”). In the event of the inevitability of such a scenario (for example, a sharp reduction in military and economic aid — the partners’ use of this mechanism as a coercive tool), or the end of the war (in light of Ukraine’s partial military success), it becomes crucial to maintain control over domestic political processes. This means minimizing the risks of destabilization and focusing on the rapid restoration of military and economic potential. This can be implemented under the condition of replacing the martial law regime with a state of the emergency regime with restrictions on political activity for at least 6-12 months.

The system reboot in Kazakhstan: a model for the post-Russian future

The unexpected announcement by the President of Kazakhstan, Kassym-Jomart Tokayev, about early presidential elections and constitutional reform this autumn shows his desire to carry out a complete reboot of the country’s political system. Many reasons can explain these decisions:

1. President’s desire to cement his position as a reformer, the founder of a new, not post-Soviet, but “Kazakh” Kazakhstan, to move away from Nazarbayev’s shadow and become a more self-sufficient political player;

2. The intention of the ruling elites to formalize the clan-family structure of governance in Kazakhstan, which until then remains informal;

3. The need to complete the dismantling of the “Nazarbayev” post-communist political system to re-establish Kazakhstan on the basis of new rules of the game and social contract.

These decisions are important because, in case of success, Kazakhstan will demonstrate the first successful example of a smooth and peaceful transformation of the post-communist system on the territory of the former USSR, which is not based on either accelerated Westernization or anti-Western conservation. In some sense, we can talk about the probable emergence of an alternative development model for the entire Central Asian region and the countries of the post-Soviet space, including Belarus, Azerbaijan, Armenia, and Russia.

In case of success, it will mean that Ukraine has not been able to “kill” the post-Soviet political system and refound the state on qualitatively new principles of public administration and a new social contract in its 30 years of independence.

Regardless of Tokayev’s political future, Kazakhstan’s transformation will intensify the competition between the collective West and Russia, for which such a transition is a betrayal of all Soviet and post-Soviet values on which Putin’s power is built. It can also affect China, which actively supports reforms in various countries based on pure pragmatism, multi-vectorism, and relative independence of elites – similar to how power was built in the PRC.

For Russia, transformations in Kazakhstan are not profitable, as they can show the actual path of reforms acceptable to the Russian population without destroying the state. In the worldview of Russian authorities, the success of Kazakhstan’s “Tokayev reform” is a reflection of an oppositional political model that could have been built in the Russian Federation but which was abandoned in favor of a more aggressive expansionist model based on resentment and historical myths.